Hero cop single-handedly lifts overturned car off woman to save her life: VIDEO 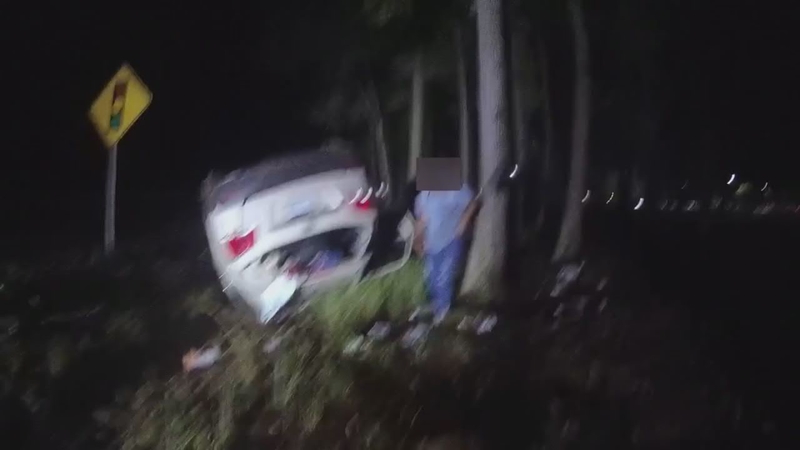 GLOUCESTER CO., Va. -- A police officer in Virginia is being hailed as a hero after video was shared of him single-handedly lifting an overturned car off of a woman's head as her child screamed for help nearby.

The incident occurred on May 7 in Gloucester County, Virginia, when Deputy Jon Holt was responding to a report of an overturned vehicle with an entrapment, according to a statement from the Gloucester County Sheriff's Office. The video was released by authorities on May 18.

"The driver was laying underneath the vehicle with her head pinned by the sunroof," the Gloucester County Sheriff's Office statement read. "Seeing the trauma her child was witnessing, Deputy J. Holt went into overdrive."

Authorities shared a portion of Deputy Holt's body camera footage that captured the entire ordeal as the officer can be seen arriving on site in his vehicle before sprinting towards the accident.

A child whose identity has been blurred from the video can be seen inside the vehicle crying and pleading with the officer to help their mother.

Officer Holt can then be heard saying, "she is trapped under the vehicle. I can't get it off," before asking the child to get out of the overturned car as the screen goes dark and Officer Holt can be heard straining and groaning loudly as he attempts to single-handedly lift the car off of the woman.

"Through sheer will and determination due to fearing the female may succumb to her circumstance in front of her panic-stricken child, Deputy J. Holt took quick action and was able to physically lift the vehicle up enough for the driver to maneuver her head out to safety," read the statement from the Sheriff's Office describing the miraculous and heroic act.

This isn't the first time Holt has been lauded as a hero, however.

In fact, it was just three months ago that he was given the Top Cop Award for the region that serves the Virginia areas of Chesapeake, Hampton, James City County, Newport News, Norfolk, Poquoson, Portsmouth, Suffolk, Virginia Beach, Williamsburg, York, Gloucester, Isle of Wight, Smithfield and Windsor, according to the Gloucester-Mathews Gazette-Journal.