Wallaroo on the loose in Peru, Illinois leads police on wild chase 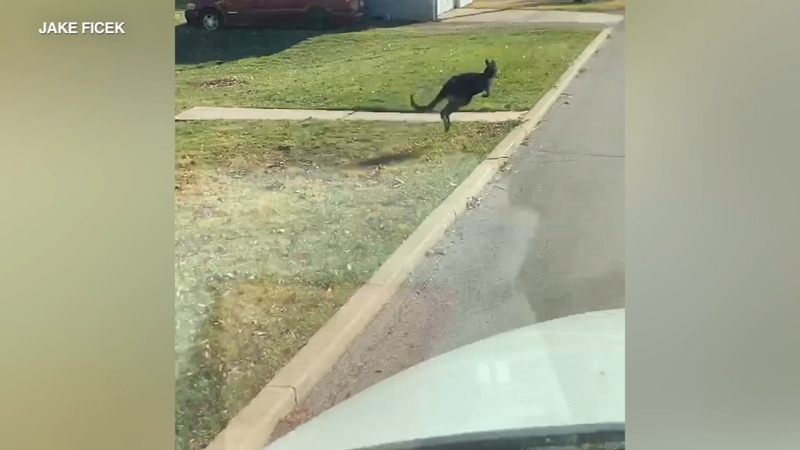 PERU, Ill. (WLS) -- A wallaroo broke free from its owner and led police on a wild chase near Peru, Illinois.

The wallaroo - which is smaller than a kangaroo but larger than a wallaby - was spotted hopping around LaSalle County Wednesday afternoon.

A wallaroo broke free from its owner near Peru in LaSalle County and led police on a wild chase Wednesday afternoon.

"About 1:15 this afternoon our 911 center started getting a lot of 911 calls from people that were literally reporting a kangaroo running down U.S. Route 6 in traffic," said Peru Police Chief Douglas Bernabei.

An ABC7 viewer shared this video of the wallaroo hopping through LaSalle County residents' yards.

Police, firefighters and neighbors tried their best to catch up with the wallaroo named Wally.

"My biggest fear at that point was, we cannot allow this animal to get hit by a car, we just can't we can't allow that," Bernabei said. "So we're going to shut these roads down."

He eventually makes his way to the Illinois River and somehow fell into the frigid water.

"I had to hold back the the owner of Wally because he wanted to enter the Illinois River and that would have been tragic," Bernabei said.

Two fishermen out on a boat saw Wally as people on the shore were yelling for their help. One of the men grabbed Wally with a fishing net, ending the two-hour chase.

"He was so cold we couldn't register his temperature on the thermometer," she said. "We warmed him up. We dried him off."

He was released back to his owner after a couple of hours, with a happy ending.

"We have never had a wallaby, a kangaroo, a wallaroo - any of those types of animals at our office," Dr. Spayer said. "It was definitely a team effort."

"Today is probably the best day of the year so far," Bernabei said. "There was a lot of people cheering then, it was a neat thing to get him out of the river and get him to a warm place and get him treated."