WLS
By Will Jones, Liz Nagy and Mark Rivera 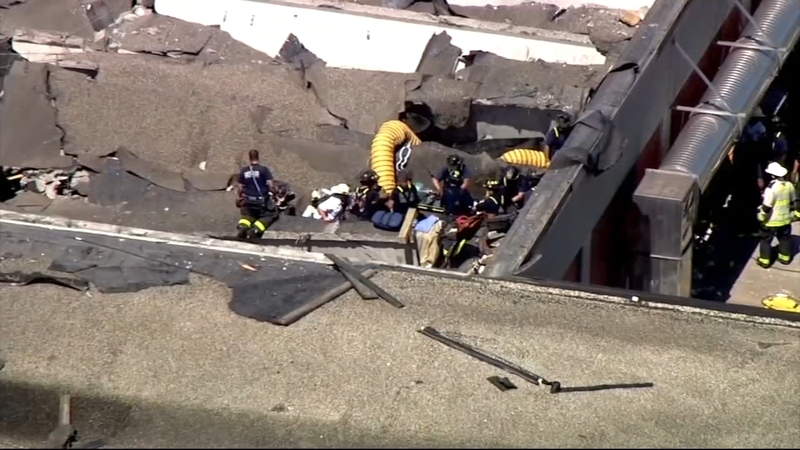 EMBED <>More Videos
CHICAGO (WLS) -- Ten people were injured after the roof of a water reclamation district facility collapsed following an explosion on Chicago's Far South Side in the Riverdale neighborhood Thursday morning.

The explosion occurred at a sludge concentration building at the Calumet Water Reclamation Plant at 430 East 130th Street at around 11 a.m., a spokesperson for the Metropolitan Water Reclamation District said.

The explosion caused the roof to collapse, caving in on itself.

Firefighters rushed to the plant, bringing in their special operations team for the rescue effort of the 10 workers who were inside the building during the explosion.

The Chicago Fire Department said all 10 people were injured and two of them had to be removed from the rubble. Fire officials said one person was pulled out after about 20 minutes.

"The only thing he remembers is seeing a flash and then hearing a big boom and then he was trapped, he could not move. They had to use a machine to get the beams off his legs," said his wife Kathy Kissane.

Kissane said her husband Bill, a pipefitter, will recover but he is badly injured.

"He saw a flash, I guess they must've known something was happening. He started running, he heard an explosion and he woke up, he was buried with beams," she said.

All 10 victims of the water reclamation building roof collapse are expected to survive, including two workers who were trapped in the rubble. Five victims have already been dischar

"He has right now, um, six broken ribs, a dislocated shoulder, a collapsed lung, a broken leg, and he's pretty cut up, pretty beat up. He's going to have surgery tomorrow," she said.

She said she was thankful to see him alive.

"As soon as I saw him, I feel much better knowing he's awake and he's joking, so, that's my husband," she said.

A second person, an iron worker, was rescued after about two hours.

Firefighters rescue a second person after the roof of a water reclamation plant collapsed on the Southeast Side after a reported explosion.

Fire officials said two paramedics were sent down to attend to the employee during the two-hour rescue. They helped stabilize him before he was extricated.

"The first individual was removed quickly but we had a problem. We had another individual that was buried and entombed," said Commissioner Santiago.

As they worked to free him, doctors at the University of Chicago coached paramedics on how to treat him as they carefully freed the man.

"We sent two paramedics down from the rescue teams that started tending to him immediately, they started an IV on him. We were in contact with the University of Chicago, we medicated that patient because we were concerned about a collapse injury, and then he was removed back to University of Chicago Hospitals via helicopter," said CPD Special Operations Chief Walsh.

"He is moving all extremities and he is answering all questions appropriately right now, he appears he has a broken jaw and a badly fractured leg but there were no amputations," said Walsh.

The University of Chicago Medicine took the four most seriously injured victims. They said two victims were in serious condition, one was in fair condition and one was discharged just after 6 p.m.

Many of the injured are in various unions, include pipe fitters and iron workers. Their representatives are on the scene at the hospital, saying they will be OK after this horrific explosion.
At least one of the 10 injured has been released from an area hospital. There's no word on when the others injured will be released, but they are all expected to survive.

Chopper7HD flew overhead as firefighters pulled people from the rubble.

A man who heard the explosion at a Far South Side water plant describes the aftermath after the building's roof collapsed.