Chicago Weather: After snowstorm, temperatures to drop to single digits in some Chicago suburbs

WLS
By ABC7 TEAM COVERAGE
Temperatures will drop Monday evening, making roadways slick and dangerous after the season's first major snowstorm dropped about a foot of wet snow in parts of the Chicago area.

Meanwhile, about 106,000 ComEd customers were still without power at about 5 p.m. About 252,000 customers have already had their power restored.

Temperatures are expected Monday night to drop to the upper teens in Chicago, and single digits in the northern and western suburbs. No snow is expected for the evening commute, but high winds will continue until the end of the day.

The cold will stick around for a couple days and then warm up a bit later in the week, with rain in the forecast for the weekend.

Warming centers are open for those who need them. 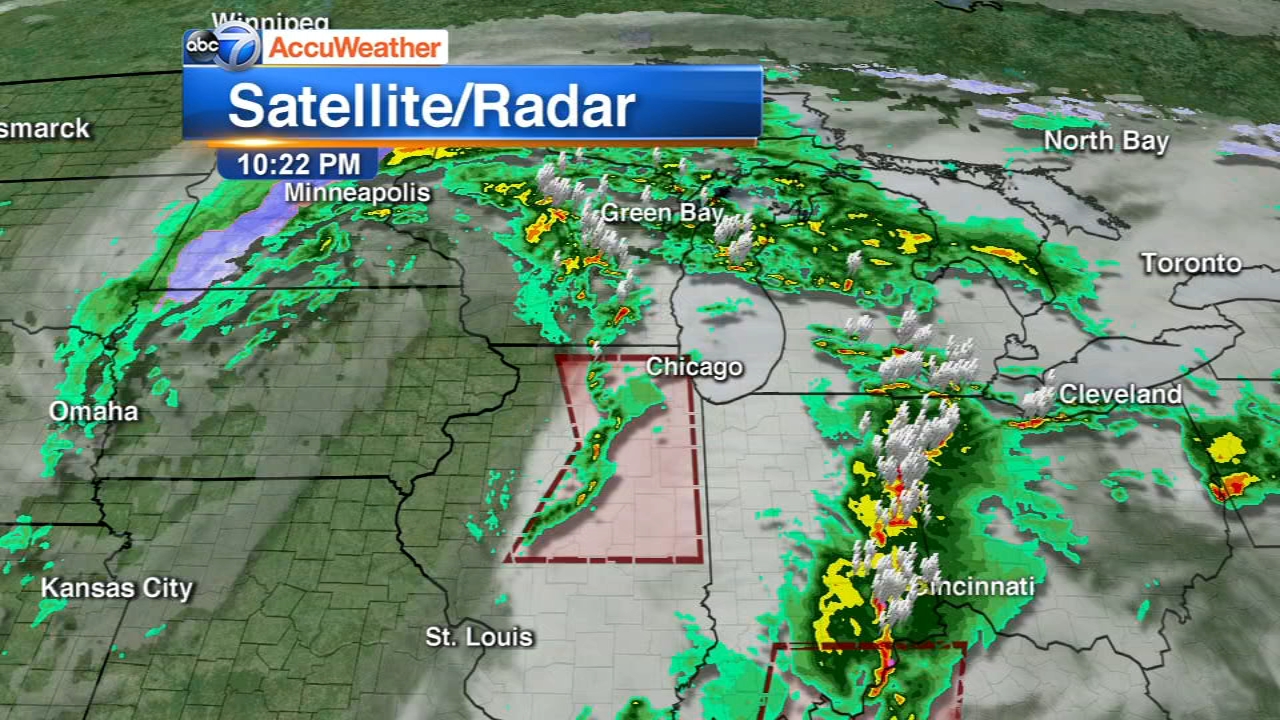 Snow started falling Sunday evening into Monday morning, creating a messy early commute, and tapered off between 8 a.m. and 10 a.m. The storm caused dozens of crashes and spinouts, including a jackknifed semi in LaSalle County.

Most of the snow fell in northern Lake County and McHenry County, as a Blizzard Warning was issued for all of the Chicago area until Monday morning. 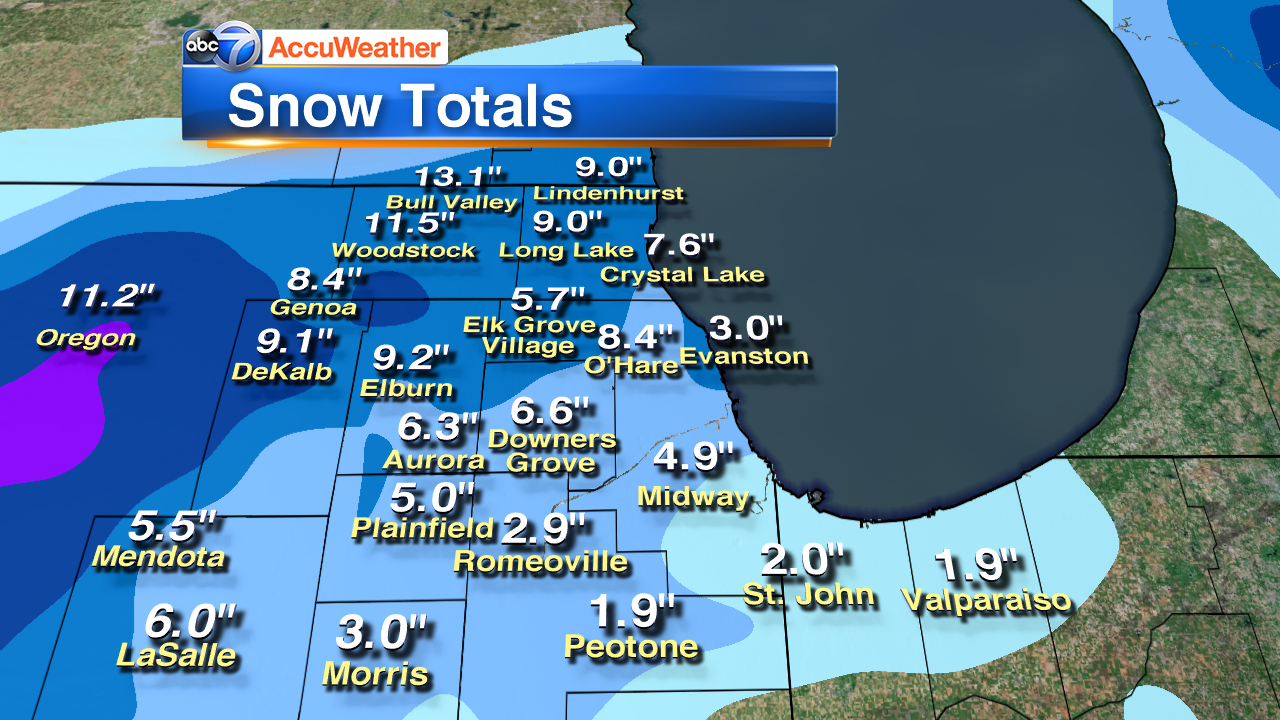 Bull Valley in McHenry County got 13.1 inches of snow -- the most of anywhere else in the Chicago area -- from the snowstorm that moved through Sunday night and Monday morning.

This storm produced the fifth-largest November snowfall in Chicago's history, with 8.4 inches falling at O'Hare International Airport as of late Monday afternoon. The largest two-day snowfall the city has seen in the month of November happened in 1895, when Chicago got a foot of snow from Nov. 25 to 26.

Chicago Public Schools opened normally on Monday. Special preparations were made, including engineers arriving to schools at 4 a.m., to ensure that roads and sidewalks are cleared and heating systems were working properly, CPS CEO Janice Jackson said Sunday night during a press conference.

About 20 CPS schools lost power -- at least partially -- because of the storm. As a result, some of those buildings did not have heat or electricity.

Students in one school had to relocate, while several others moved classes to other buildings on campus. CPS expects that all schools will have power on Tuesday.
RELATED: How to drive safely in snow

Snow removal has gone high-tech. Yes, there's an app for that.

If you can't or don't have the time to shovel or find a snowplow service, download the Plowz & Mowz app. After entering some information, including the size of your driveway, a local company is on the way to help.

"We get it, get the job, give them an estimated time of arrival, we show up do our thing and off to the next one," said Alicia McCauley, a Plowz contractor, who was clearing a driveway in Bartlett on Monday.

The average price to clear a Chicago area driveway is about $50 with an added charge for additional shoveling. Customers also receive a photo of their cleared driveway.

The app was developed by a Syracuse University student whose mother was snowed in and couldn't find a service to help dig her out.

Earlier Monday, at the height of the storm, 351,000 customers were in the dark. As of 9:30 p.m., 70,000 ComEd customers were still without power. Most of the outages were in the northwest suburbs. The hardest-hit areas overall were west of O'Hare and some western suburbs, including Arlington Heights, Mount Prospect, Palatine, West Chicago, Winfield and Wheaton.

Candles provided the only light in the D'Anca house in Palos Heights Monday night, at least since the power went out at 2:30 a.m. With no electricity, the family's sump pump quit and their basement is now filled with several inches of water.

In Indiana, about 40,000 NIPSCO electric customers were impacted. As of 5 p.m., about 6,800 customers were without power, primarily in Lake, Porter and LaPorte counties.

A major NIPSCO pole came down near White Oak Avenue and the Canadian National Railway tracks near Centier Bank in Munster, officials said. Snow and ice that built up on utility lines and strong winds compromised the pole.

The sheriff's office in Lake County, Indiana, said power lines were down at 153rd and Mississippi and there were power outages in Crown Point, Schererville, Merrillville and St. John.

In Chicago, strong winds knocked a large tree branch onto a car in the 5100 block of West Addison Street. On the Northwest Side, a massive tree fell onto a fence and deck at a home in the 3700 block of North St. Louis, barely missing the front window. A transformer started sparking at Montrose and Moody and power lines came down in other parts of the city. After clearing snow from main roads in Chicago, the city's snow plow fleet transitioned to residential streets around midday Monday.

A winter storm brought a rain/slushy mix to the Chicago area and high winds led to downed power lines and trees.

In northwest suburban Park Ridge, strong winds tore large trees out of the ground Monday, causing them to fall across Northwest Highway.

Snow-covered roadways proved a challenge for motorists and a business boon for tow truck drivers.