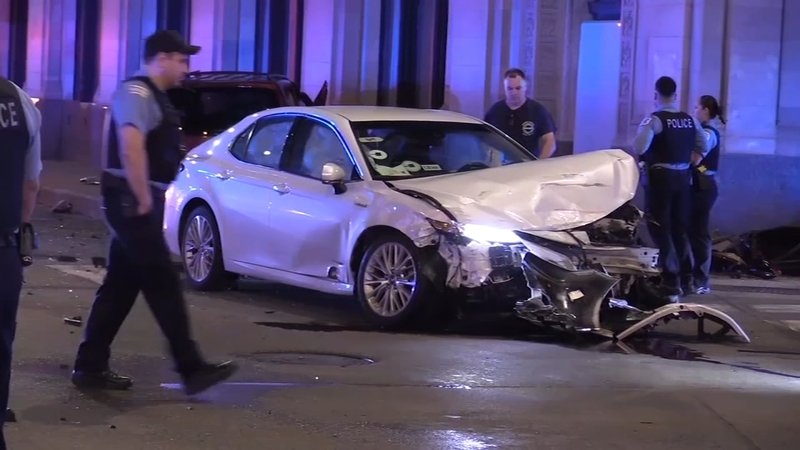 CHICAGO (WLS) -- A man died and three women were hospitalized Thursday morning after police said a minivan was hit while running a red light in the West Loop and the driver fled the scene.

A 1999 Pontiac Montana minivan was traveling southbound in the first block of South Halsted Street at about 2:19 a.m. when police said it ran the red light and was hit by a 2018 Toyota Camry rideshare car traveling west on Madison Street. The female driver of the minivan fled the scene, police said.

One person in the minivan, a 28-year-old man, was transported to Stroger Hospital, where he was pronounced dead. He has been identified by family as Kenneth Smith.

"It's gonna be hard because, like I said, I know what it's like not having a dad around and he's a sweet little boy and we're gonna do whatever we can to make him feel comfortable and make him happy," said Janice Bankhead, maternal grandmother of Smith's son.

Three women in the minivan, ages 21, 27 and 32, were transported to Northwestern Memorial Hospital and Stroger Hospital in stable condition.

The driver of the minivan is not in custody, police said.

"She should have stuck around. Whoever she is, I'm pretty sure she's hurt, too because I saw the car and she's injured so she's gonna have to go into the hospital sooner or later to get herself checked out," Bankhead said. "You can't hide forever. They're eventually gonna find you and they know who you are."

The driver and passenger of the Toyota were treated at the scene of the crash.

"I had the green light," the Toyota driver said. "I was going and all of a sudden they came on the red."