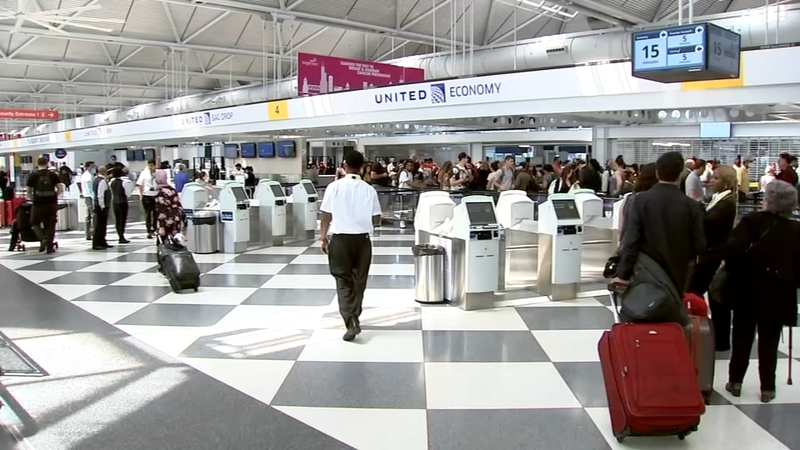 CHICAGO (WLS) -- After a chaotic weekend for air travelers, things are starting to calm down. But this could be a frequent pattern that we'll see throughout the summer.

Thousands of flights were canceled nationwide from Friday to Sunday night, leaving some airports an absolute mess. O'Hare and Midway managed to stay mostly on track, but a lot of people flying here from other places ended up getting stuck.

"Definitely concerned just because of what I hear on the news," one traveler said. "I do see there's a lot of delays and cancellations."

Experts say this tumultuous weekend for holiday travel was a perfect storm of air travel complications: including staffing shortages, packed planes and the ripple effects of bad weather.

"I was definitely concerned a little bit because I know some airlines are shortstaffed," Tim Wackenhuth said on his way to Rochester. "My airline is one of them."

That concern was warranted for travelers over the weekend.

"Three small delays," said LeeAnn Morris of her trip from Charleston. "We were supposed to leave at 1 and I think we left at like 430."

Morris said her flight was delayed for that very reason.

"We were told that it was a crew issue in Newark, so not even in Charleston," she said.

From Friday through Sunday, more than 10,000 flights were delayed or canceled nationwide. The issues were due in part to the severe storms that hit much of the country the past week, but also to staffing shortages.

"A lot of people were asked to leave their jobs or furloughed for the last couple years so bringing those people back has been a challenge I think for some of the airlines," said Kendra Thornton, of Royal-Travel.com. "So I think that's number one. And also just I'm seeing a lot of mechanical delays too, so it could just not be the crews that are in the planes flying with you, but also just ground crew and mechanics."

While the cost of airline tickets are sky-high, airlines having a hard keeping up with the post-COVID travel demand.

"There's a lot of demand and there's really not enough supply," Thornton said.

And with the first fully-observed Juneteenth federal holiday, it couldn't have come at a worse time and is keeping travelers on their toes going forward.

"I try to get a morning flight or early afternoon flight, because the later flights always get canceled," Wackenhuth said.

"It's always in the forefront when we are getting ready to travel: we get there really early, just kind of keep on top of the tracker for flights to make sure that we don't waste a trip all the way to the airport and then be canceled or delayed anyway," said Sue Vacek, who was traveling from Charlotte.