Why not bomb a hurricane? NOAA gets asked about it all the time 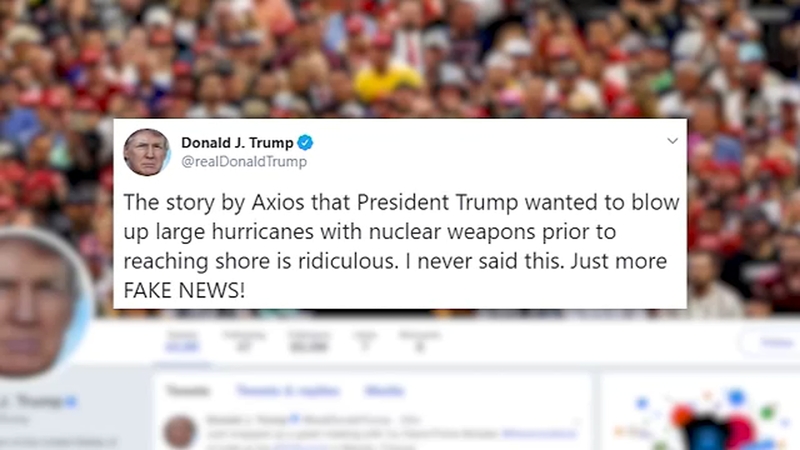 It seems so unfair. In our endless human quest to control everything, the weather has heretofore eluded us. Why can't we make rain? Why can't we stop earthquakes?

Why can't we nuke hurricanes into submission?

According to a report, President Donald Trump once suggested that the US could try dropping a nuclear bomb into the eye of an approaching hurricane to knock it off its course. Which, for the record, the President has denied he ever suggested such a thing.

The story by Axios that President Trump wanted to blow up large hurricanes with nuclear weapons prior to reaching shore is ridiculous. I never said this. Just more FAKE NEWS!

It's a frequently asked question

To be clear, Trump would be far from the only person to ever suggest it. Dennis Feltgen, public affairs officer for the National Hurricane Center, says he gets between three and four dozen emails every hurricane season from concerned citizens suggesting climatological nuclear warfare.

He tells them all the same thing virtually any scientist alive today would say: It ain't gonna work.

Feltgen and his team reply to such (good-natured) inquiries with a lengthy response listing all of the reasons typical "hurricane modification" tactics don't work. They all circle back to one truth: Hurricanes are way bigger and more powerful than most people can conceptualize, and the energy they carry is "immense in terms of human experience."

"As carefully reasoned as some of these suggestions are, they all share the same shortcoming: They fail to appreciate the size and power of tropical cyclones," NOAA's response, provided to CNN, reads.

NOAA also maintains a whole nuclear hurricane/cyclone FAQ page that goes into even more detail about why dropping bombs on storms wouldn't lessen them and could possibly create even more problems.

"Apart from the fact that this might not even alter the storm, this approach neglects the problem that the released radioactive fallout would fairly quickly move with the tradewinds to affect land areas and cause devastating environmental problems," the explanation begins. "Needless to say, this is not a good idea."

So why do people think nuking a hurricane would actually work?

Feltgen ventures that people see nuclear explosives as the ultimate tools of destruction.

"I remember nuclear drills, climbing under desks as a child or going into a church to hide. It was a scary time," he tells CNN. "People remember that and figure, okay, nuclear power is a destructive thing. It will destroy anything. What happens if we use it against a hurricane?"

There's more than one way to (try to) stop a storm

From NOAA's literature on hurricane modification efforts, it appears the nuclear option isn't the only technique people suggest. NOAA's Hurricane research division maintains a whole list debunking methods like seeding storms with silver iodide or hydroscopic particles, putting stuff on the surface of the ocean to prevent evaporation, cooling the surface of the water with icebergs and harnessing the energy of a storm to at least, you know, get something out of Mother Nature's wrath.

To the last point, NOAA's Neal Dorst writes this:

"If someone can figure out a way to harness that energy, the more power to them. They could earn millions of dollars and the gratitude of everyone on the shore."

Such a wide array of storm prevention proposals is a testament to people's concern and ingenuity, though not necessarily their scientific acumen.

We should not nuke hurricanes.

There was a time though ...

However, scientists weren't always this united on the folly of nuking, coating, coaxing, inoculating or otherwise warding off mammoth weather events.

From 1962 to 1983, the US government operated Project Stormfury, a perfectly-named attempt to weaken tropical storms by seeding them with silver iodide. The project involved dropping canisters of the stuff outside the eyewall of a storm with the hopes the chemical reaction would freeze the waters inside the storm, disrupting its formation.

At first, the project seemed to work! A few hurricanes seemed to weaken with Stormfury's wrath, but over time researchers realized there was no defensible connection between the methods and the outcome of the storm.

The illusion of success was actually a supercooled case of confirmation bias, and the hurricanes were going to do what they wanted to do regardless.

Hey, you never know if you don't try.