WLS
By Megan Hickey
CHICAGO (WLS) -- A man who tried to rob an off-duty Chicago police officer, blocks from CPD headquarters, is on the run. His alleged accomplice was shot by that officer and faces felony charges.

The attempted carjacking occurred in the 3600-block of South Prairie Avenue in the city's Bronzeville neighborhood, two blocks from Chicago Police Department headquarters.

The off-duty officer was dressed in plain clothes and sitting in his personal vehicle not far from his home around 6:30 p.m. Monday. Police said that's when two people - one of them armed - approached each side of his car. One of the suspects tapped on a window to distract him and the other announced a robbery, police said.

"An armed confrontation ensued causing the off-duty police officer to discharge his weapon and strike the offender one time in the abdomen," said Sergeant Cindy Guerra, Chicago Police Department.

That suspect was transported in serious condition to Northwestern Memorial Hospital, where his condition stabilized. He was identified by police Tuesday as 18-year-old Carlos Hendricks. he lives in the neighborhood where the crime took place.

The other would-be carjacker fled the scene and is still at large.

The off-duty officer, an 18-year veteran of the force, was not hurt. He was taken to Rush University Medical Center for a routine check, police said.

Police went door-to-door in the area, looking for witnesses, soon after the incident occurred. Darlene Amao said she thought the outcome was inevitable.

"He did the right thing. Yes he did," Amao said. "Unfortunately, the person that did it got shot. But you're going to learn a lesson from that. You carjacked the wrong one."

A weapon was recovered at the scene, in addition to the off-duty officer's gun.

The officer will be placed on routine administrative duties while the Civilian Office of Police Accountability investigates his use of force.

"It shows how brazen these offenders are. They'll target anyone and tonight it happened to be one of our own," Guerra said.
Report a correction or typo
Related topics:
chicagobronzevillechicago shootingpolice shootingchicago crimechicago police departmentcarjacking
Copyright © 2021 WLS-TV. All Rights Reserved.
RELATED 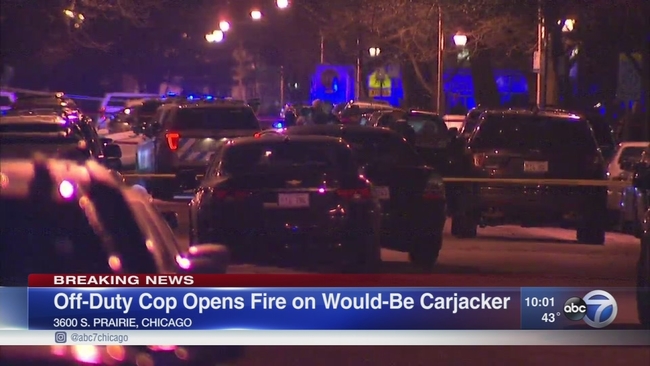