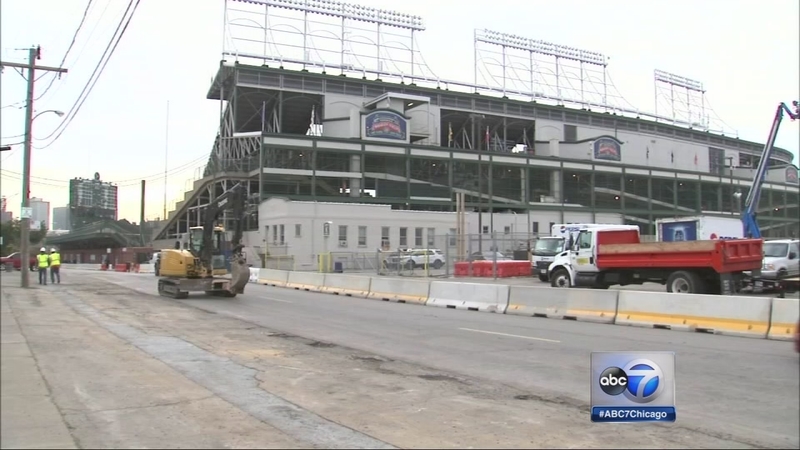 CHICAGO (WLS) -- After months of negotiation and legal challenges, the Chicago Cubs are set to begin the $575 million renovation of the Friendly Confines.

Demolition will begin Monday for the Cubs' plan to expand the bleachers and move ballpark walls back onto Waveland and Sheffield avenues, officials said. Seven new signs will be added to the outfield, including a new video board in left field and a right field beer sign.

The team aims to have the project should be complete by Opening Day of the 2015 season. The Cubs will be playing their arch rivals, St. Louis Cardinals, on April 6.

Cubs spokesman Julian Green said the team wanted to do the construction in the off season and get started as soon as possible.

"The challenge with that is, we have only 26 weeks to complete the bleacher expansion project," Green said. "In a city like Chicago, with sub-zero temperatures and 100 in. of snowfall last year, it can make a project like this pretty complex. We're hoping for a rather mild winter."

Some of the heavy equipment can already be seen here on West Waveland Avenue.

"I think it's about time that Wrigley gets a little face lift as long as they don't mess it up," Rice said.

Renovations of the bullpens, home locker room and batting cages will follow. Those changes are expected to be finished before the 2016 season.

After the Cubs won their final home game of the season, crews put up barricades around the 100-year-old stadium. Cubs First Baseman Anthony Rizzo said he is looking forward to the renovation.

"I know Wrigley is very historic. But it's still going to be historic with the ivy, the bricks everywhere and the seats and the bleachers. The video board is just going to help us gain an extra home field advantage in my opinion," Rizzo said.

Resident Nikki Pesch, however, thinks the construction will bring some good and some bad.

"I'm neutral to happy about it," Pesch said. "I do believe that it will help our property values. I realize that the parking situation will be difficult for a lot of the residents."

A lawsuit still looms large over the ballpark plans. Eight rooftop owners filed the suit in Cook County Circuit Court in August. It asks a judge to reverse the city's action, saying it broke its own rules and deprived them of their property rights without due process.

Rooftop owners maintain the plan violates a revenue-sharing agreement that prevents the team from taking actions that block their views.

The lawsuit names the Commission on Chicago Landmarks and its members, as well as the city.

The Cubs said this will be historic - an expansion project unlike anything sports has ever seen. The team also said it is necessary to keep the aging ballpark around for years to come.