WLS
By John Garcia and Cate Cauguiran and Craig Wall 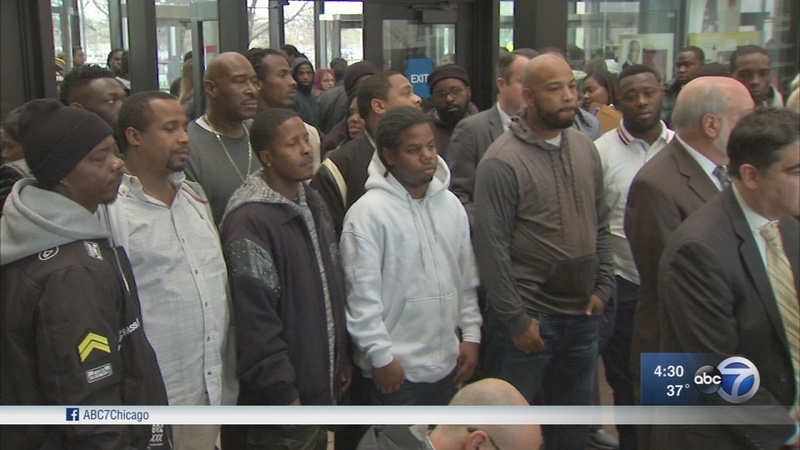 CHICAGO (WLS) -- In what's being called the first mass exoneration in the history of Cook County, criminal charges against 15 former inmates were officially thrown out by a judge Thursday morning.

The men petitioned the court in September, seeking to have 1 convictions overturned and set aside. They found out Wednesday that their request had been granted.

Ten of the 15 defendants appeared in court Thursday at the Leighton Criminal Courthouse to have their slates wiped clean.

"Now I have vindication. It's very sad to think that we as a people, and I mean all of us, in the United States, have to go through this type of stuff," said Philip Thomas, another exonerated man.

The 18 overturned convictions, from 2003 to 2008, were tied to ex-Chicago Police Sergeant Ronald Watts, who was accused of manufacturing evidence during investigations. The defendants claimed Watts and his team of officers framed them for drug crimes.

"Everyone knew, pay Watts or go to jail. That's just the way it was going to go. If you're not going to pay him, you're going to jail. Everyone knew what he was doing," Gipson said.

"In these cases, we concluded that unfortunately, the police were not being truthful. We couldn't have confidence in the integrity of their reports and their testimony. So in good conscience, we could not see these convictions stand," said Mark Rotert, director of the Cook County State's Attorney's Office's Conviction Integrity Unit.

"I am just extraordinarily heartened by today. I think it's an extraordinary sign of what's going on in this country and this city," said Joshua Tepfer, the attorney representing the group of exonerated men.

Watts was convicted of extorting money from drug dealers in 2013 and served a federal sentence of 22 months. Observers said the mass exoneration marks a historic day in Cook County.

"I think there is potential that this will emerge, when it comes into full view, as perhaps the biggest scandal in the history of the police department," said independent journalist Jamie Kalven.

Frank and Alexa Saunders have since moved out of state to try to escape what they called the culture of corruption at the Chicago Police Department.

"I just feel like this can be put behind us now because voice-their voices, our voices are being heard," Alexa Saunders said.

Chicago police spokesman Anthony Guglielmi said Thursday night that six officers and a sergeant will be placed on desk duty pending an investigation into whether they committed any wrongdoing while working under Watts.

Chicago Police Superintendent Eddie Johnson spoke Thursday about the mass exoneration of 15 men whose convictions were tied to a tained Chicago police officer.

CPD Superintendent Eddie Johnson said he will not be making a rush to judgement on what should happen with at least seven other officers who were part of Watts's team, but he is also making clear he won't tolerate bad cops.

Johnson faced tough questions during an appearance at the City Club, both because of Watts's behavior and because other officers are still on the street and have never been charged.

"We're taking a very hard look at anybody that was involved in those incidents," Johnson said.

Johnson said the exonerated men's allegations were investigated by an outside agency at the time, but the department will now look at those cases and the other officers involved.

"If they day comes where they are convicted of something, they won't be on the job. But we just can't arbitrarily take the job away from people," he said.

He also said the department is looking at the possibility of taking the officers off the streets during the investigations.

"Well, we're looking at it very, very hard and once I get enough information, then that's maybe what happens," Johnson said.

During his speech to the City Club, Johnson talked about the importance of police integrity in the communities they serve, especially as the department is making reforms and community policing key elements in reducing violence.

"As part of that commitment we will create a team of dedicated people to ensure that reforms are implemented properly the first time and are sustainable in the long term to truly change the way that CPD does business," he said.

But Johnson does not see the exonerations as a setback.

"Things of that nature hurt it, but it doesn't damage it to where we can't repair it," he said.

Mayor Rahm Emanuel introduced Johnson and had a message for police officers.

"We expect the most of you and we'll invest the most in you, and there is going to be zero tolerance for anything deviating from that," Emanuel said.

Tepfer said some of the officers linked to Watts in the wrongful convictions are still on the police force. He alleged those officers are still targeting the defendants today.

"This corruption was covered up by the highest levels of the Chicago Police Department. It was swept under the rug by all sorts of law enforcement community for a decade or more. This is a code of silence, you've heard that. A thin blue line unlike anything that any of us have ever seen," Tepfer said

Tepfer, who is part of The Exoneration Project, a free legal clinic at the University of Chicago Law School, said there could be more overturned convictions to come.

During Watt's tenure, he and other Chicago police officers were linked about 1,000 arrests that led to about 500 convictions. To date, 26 convictions have been overturned. Tepfer said that means there are still more than 450 cases for possible review.

State's attorney spokesman Robert Foley said conviction integrity unit is looking into dozens of other cases and identified a pattern suggesting "corrupt activity" involving Watts and "members of his crew."

All 15 defendants completed their sentences. That's time they will never get back.

Tepfer said his clients are exploring the option of seeking reparations for time served, but they were just enjoying the moment Thursday.