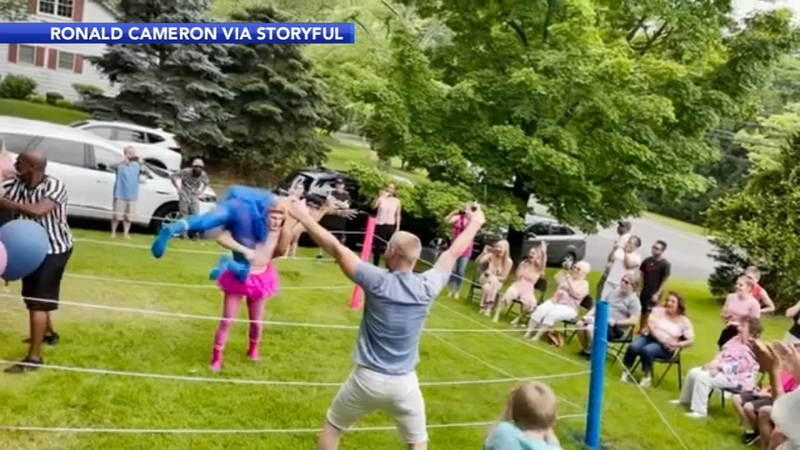 CINNAMINSON, New Jersey -- It was a smackdown of a reveal in Cinnaminson, New Jersey as parents-to-be learned of their baby's gender WWE-style.

Ronald Cameron and his partner Kayla Peterson are expecting their first child in December.

Gervase, who many may recognize from season one of the reality series "Survivor," came up with an interesting concept.

Since Kayla is a huge WWE fan and Ronald is a middle school wrestling coach who is training MMA, Gervase threw out the idea - why not have a wrestling match gender reveal?

Ronald built a makeshift ring at Kayla's house, complete with blue and pink PVC pipes staked into the ground holding up ropes, for a grudge match between Team Girl wrestler and Team Boy wrestler.

Kayla's brother, Gunner Peterson, and Ronald's brothers, Shawn Ruffin and Anthony Cameron, all had starring roles. Gervase, the Vince McMahon-like promoter of this production, was the referee.

Shawn was wearing a blue tutu wrestling attire; Anthony was in pink.

The match may not have been a classic a la WrestleMania III's 'Macho Man' Randy Savage vs. Ricky 'The Dragon' Steamboat, but it did have reversals, false finishes and even outside interference like any good WWE encounter should.

After a chair shot from Gunner, Anthony pinned Shawn for the 1-2-3.

This meant, if you were following along at home, Ronald and Kayla are having a baby girl!

As for names, maybe they'll get some inspiration from their favorite wrestlers. Ronald's favorite is Rey Mysterio. Kayla's is Triple H. (We'll check back on that.)

Should the two go on to have another child, Ronald is not sure how he can top this.

"Maybe we'll have to do a ladder match next time," Ronald joked.