1 dead after car crashes into restaurant on Northwest Side 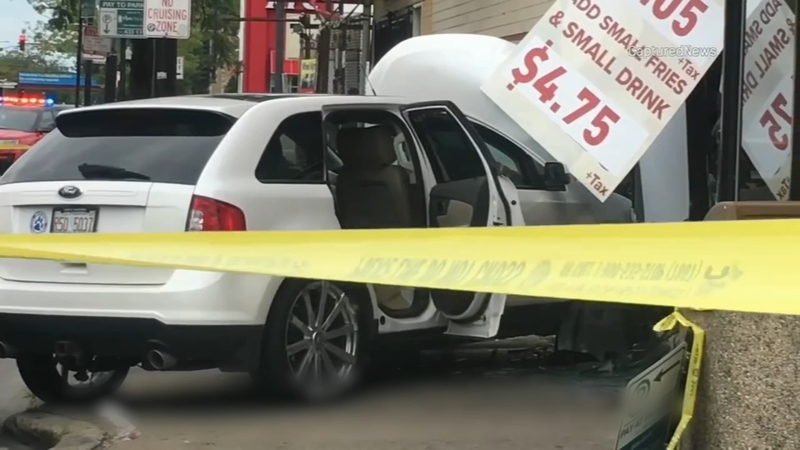 1 dead after car crashes into restaurant on Northwest Side

CHICAGO (WLS) -- An 81-year-old woman is dead after a car crashed into a restaurant Saturday, striking five people on Chicago's Northwest Side, police said.

The Cook County Medical Examiner confirmed that one person was pronounced dead after the crash, but the office didn't release any other details about the victim.

Chicago police said a 34-year-old man was driving near the 4700 block of W Fullerton Ave. when he lost control of the vehicle and crashed into a pizzeria.

A group of people standing on the sidewalk didn't have time to react, and the car hit four women and a man.

The 81-year-old woman was pinned underneath the vehicle before she was pronounced dead at a hospital.

Nathaniel Alicea, an employee at the restaurant, said he was in the back when he heard a loud boom.

"I look out and I saw glass everywhere," Alicea said. "I went outside and heard the guy swerved in through here, hit the glass and there were people all over the floor."

Alicea said the driver tried to get away.

Several witnesses banded together to stop him from doing so until Chicago police arrived on the scene.

Alicea said the man's hands were shaking when the witnesses tried to get him away from the steering wheel.

"I just tried to stay away from that and check if they were OK," Alicea said.

A 60-year-old man and two women, ages 64 and 76, sustained leg injuries, according to Chicago police.

An 82-year-old woman broke her leg.

The offender is in custody, according to police. An investigation into the crash is ongoing.
Report a correction or typo
Related topics:
belmont cragincar crashrestaurantcar into building
Copyright © 2021 WLS-TV. All Rights Reserved.
More Videos
From CNN Newsource affiliates
TOP STORIES