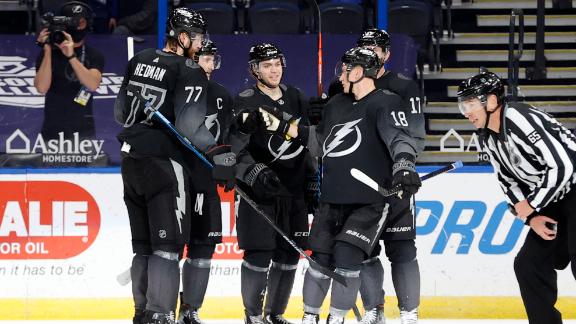 Steven Stamkos had a goal and an assist, and Yanni Gourde, Anthony Cirelli and Brayden Point also scored for Tampa Bay. Alex Killorn had two assists, and the Lightning improved to 12-2-0 at home.


Vasilevskiy's winning streak is the ninth longest in league history and matches the team record set by Louis Domingue from Nov. 29, 2018 to Feb. 19, 2019. Vasilevskiy improved to 20-3-1 on the season, tied for the second fewest games required to reach the 20-win mark in NHL history behind only Tiny Thompson in 1929-30 for the Boston Bruins.

"Vasy was incredible back there tonight, pretty much like he has been this entire year,'' Cirelli said. "Every game he's been there making those huge saves for us when we've needed them.''

Alex DeBrincat scored for the Blackhawks, who have lost four straight and six of seven. Malcolm Subban finished with 25 saves.

"We're being tested, it's been a hard stretch,'' Chicago coach Jeremy Colliton said. "We haven't been perfect, there are areas we'd like to be better in and maybe you end up breaking through when you do that.''

Point put Tampa Bay in front at 6:21 of the opening period, cutting across the crease for a pass from Killorn and stuffing the puck inside the far post for his 12th goal of the season.

Cirelli increased the lead to 2-0 during 4-on-4 play when he cut from just below the blue line away from Duncan Keith and took a feed from Mikhail Sergachev. Cirelli cut in alone and deked to his backhand before flipping a puck over Subban at 1:53 of the second period. Sergachev picked up his 100th career assist on the play.

Chicago controlled most of the second period despite being kept off the board.

The Blackhawks had 1:22 of a 5-on-3 power play but were unable to register a shot on goal and just four shot attempts.


"Five-on-three, have to convert,'' DeBrincat said. "They do a good job of blocking shots, getting in lanes. But we have two extra guys out there so we should be able to make a play. Obviously, we have to work on that. It just wasn't there today.''

Tampa Bay wound up scoring twice more in the second period to build a 4-0 lead despite Chicago's 24-11 advantage in shot attempts.

Gourde broke in with speed down the left wing boards and cut in for a one-handed shovel attempt that was turned aside, but he found the rebound at 14:15.

On a late power play chance, Stamkos won a faceoff back to Hedman, who put a shot on goal before Killorn was able to retrieve the rebound and get a pass over to Stamkos at the left circle for a one-timer at 18:21.

"Tonight was one of those games where between the second and third we are up on the scoreboard but we were not pleased with our effort,'' Stamkos said. "There are going to be games like this throughout the course of a season, you just want to minimize them as much as possible because, though we know we have the best goalie in the world and again he showed it tonight, you just don't want to have to rely on that too often.''

The shutout bid for Vasilevskiy ended at 4:50 of the third period when Dominik Kubalik found DeBrincat alone in the low shot for a quick wrist shot.

"They're a team that punishes you when you make mistakes, we made a few,'' Colliton said. "They made us suffer. I thought we created more than enough. We weren't able to break through and when we made a mistake, they punished us. That's clearly an area we have to be better in.''


KILLING IT ON OFFENSE

Killorn has at least one point in all seven games this season against the Blackhawks with one more meeting scheduled for April 27 in Chicago. Killorn saw his streak of goals in five consecutive games against Chicago end.

Since the start of the 2010-11 season, Chicago has one regulation victory against Tampa Bay in 24 meetings. The only victory for the Blackhawks in seven meetings this season came in a shootout.