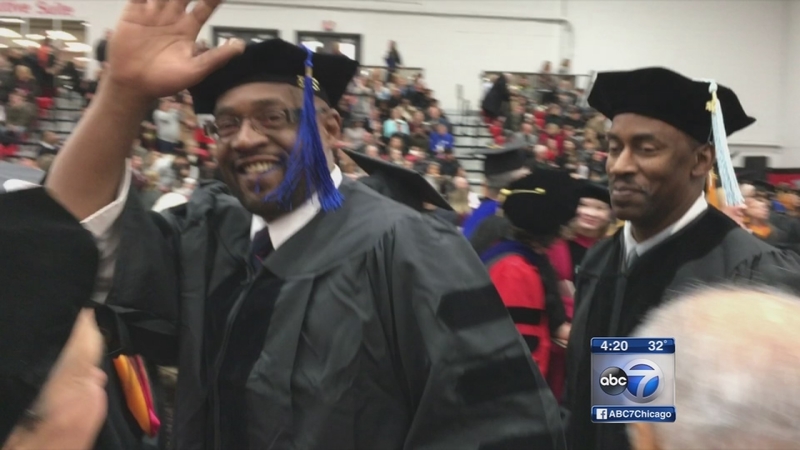 CHICAGO (WLS) -- It's a story of strong will over circumstances and education over incarceration.

As we celebrate Black History Month, we turn our attention to a man who is working to show others the way up.

Daniel Geiter describes his former self as "a really good thief." Now he is a new man with a big idea that just might change lives.

Geiter believes he holds the key to success. He plans to turn a South Side warehouse into a non-profit community college geared toward ex-cons, called Ward College.

"Forty percent of our students will be former offenders or current offenders from either Cook County or Illinois Department of Corrections," Geiter says.

It's a way for him to open doors for those who have been behind bars and to keep them from going back like he did.

"I'm a convicted felon myself," he explains. "I was last paroled in1999. From my juvenile years up until about 25, I was a repeat offender. Twenty- some odd times in and out of jail."

Until he made up his mind to turn his life around.

"It was 1998. It's like 120 degrees. I'm in Vienna Correctional Center and the walls are sweating literally and I woke up and I looked at that room and I said, 'Lord if I ever get out of here, I'll never come back' and I haven't been back and the only thing that saves me from going back every day is education," he says.

Recently, Geiter graduated from Benedictine University, earning his doctoral degree in education. That's after earning his Bachelor's at St. Xavier and his Master's from University of Chicago. Geiter credits a nun, Sister Sue Sanders, as the angel who pushed him to succeed.

"One of the things that will make Daniel a fine professor and a teacher and president of Ward College is he understands what it means to need help and what it means to return it to others," Sister Sanders say.

Now Geiter wants to pass on the opportunity for education to other ex-offenders.

"The one thing that the data proves is the more education a former offender has though, the less likely that he or she is to re-offend," Geiter says.

He is rallying the support of many who have aided in his journey, including 91-year-old E. Glen Ward and his 92-year-old wife Adelaide for whom the college will be named.

"Just the whole idea of helping people who were having difficulty finding jobs because I automatically know that if people don't have work to do they're going to steal," says Adelaide.

"We want to be able to do something now to help them trade in their guns for pens and computers," says Glen.

"Why is Ward College important to me? Because I want to be able to give back like those individual gave to me," says Geiter.

Geiter plans to open Ward College in August. He plans to partner with another local university to help with accreditation and is also working to raise about 250,000 to get the school running.