The weird world of expensive wine This article originally appeared on FiveThirtyEight and is reprinted with permission.

William Koch -- yes, one of those Kochs -- is giving a tour of his wine cellar when he asks the obvious question: "Did you see the wine bathroom?" he asked. "Wanna see it?"

It's an opulent cellar, replete with Roman mosaics, a Guastavino-style ceiling and a Dionysian bust. The bathroom is, one can't help but assume, where Koch and his guests unzip the flies of tailored Brioni suit pants and catch final glimpses of $1,000 bottles of Burgundy and Bordeaux, since metabolized and micturated.

But some of Koch's bottles will now meet different ends. Koch gave a tour of the wine bathroom for a promotional video ahead of the sale of more than 20,000 bottles from his cellar, at Sotheby's, in New York. The sale, which took place over three days last month, fetched $21.9 million, going down as one of the richest wine auctions in history.

I watched the sale's final day unfold, fascinated -- and a little dismayed -- by the wines fetching these handsome sums, where they came from, and where they were going. Questions like that are sparks a FiveThirtyEight writer is obligated to kindle.

Off I went in search of data, and I found it in the form of a juicy, dense spreadsheet containing 140,000 wines from 10,000 producers in 33 countries, and their prices. The data was sent to me by Peter Krimmel, the CTO of Vinfolio, a fine wine retailer. It's wide-ranging, assembled by the company using auction results from 12 major houses, including Sotheby's, representing "the vast majority of the fine wine auction market." For the 140,000 wines covered, it has data on the producer, year (the wine's vintage), bottle size, region, subregion, American Viticultural Area (where applicable), color (red, white or rose) and price.

After quaffing the data, what I found was a high-end wine market, and a blockbuster auction, with notes of geography, chemistry, economics, culture and thousands of years of history -- with a detectable aroma of bullshit. Let's have a taste.

"Starting in Bordeaux, with the Latour," auctioneer Jamie Ritchie said, as he opened the Koch sale's third and final day. Bids flew in via the telephone, the Sotheby's website, and the floor of the auction room on New York's Upper East Side. It was a good place to start the day -- no place gives a better introduction to the history, and economics, of wine than France.

Chteau Latour, in Pauillac in southwestern France, traces its history back to 1331. It was a favorite of Thomas Jefferson's. Koch had set out to collect a thorough "vertical" of the wine -- owning at least one bottle of Latour from each of the past 100 years. Today, Latour sits at or near the apex of the some 7,000 producers in France's Bordeaux wine region. It's a storied region; the Romans were the first to cultivate vineyards there. Millennia later, it's a useful place to show what almost any wine drinker knows: The older stuff is the pricey stuff.

In Bordeaux, as almost anywhere else in the world of fine wine, wines get more expensive as they get older, and that effect accelerates the older the wine becomes. There's a lot going on here -- aging and its complex chemistry, market scarcity (people do sometimes drink the wine, after all), vintages perceived as particularly desirable or undesirable as a result of the weather, the scope of the data set.

The increasing value of older wines is an essentially universal phenomenon in the high-end auction market. But for the rich oenophile, old wines may not be such a bad deal. "Although old wines are expensive, I think they're actually priced more reasonably than new wines," Robin Goldstein, editor of "The Wine Trials," told me in an email. "Old wines' value is driven by their age-worthiness and verifiable storage history, which really does impact their taste, whereas new wines' value is driven by critics' rating scores and hyper-inflation in the high end of the market, neither of which correlates with taste."

Leah Hammer, Vinfolio's director of cellar acquisitions, echoed this idea. She told me that one reason older wine is expensive is because it was too good to drink right away. So, say 1960 was a bad year for Bordeaux wine because of weather. The bottles from that year would tend to get drunk right away, as the Bordeaux faithful consumed the swill they didn't think was worth keeping. The best stuff -- from 1961, say -- was saved for later. Two effects -- the aging of the wine and the selection of the good vintages -- drive the price increase in the chart above.

The most expensive Bordeaux wine, on average, and one of the most expensive wines in the world, comes from a tiny little place called Chteau Le Pin. (Two double magnums of 1995 Le Pin were sold for a total of $30,000 at the Koch sale.) It sits on less than seven acres (less than four soccer fields) on Bordeaux's Right Bank and produces just 5,000 to 6,000 bottles a year. A single bottle averages over $2,000. One other Right Bank producer, Petrus, a 12-minute drive from Le Pin, also cracks the four-figure average. (For those of us who can't afford a bottle and would like to taste vicariously: Robert Parker, the influential wine critic, found flavors of lead pencil, roasted nuts, smoke, spice, fruitcake, black cherries, white chocolate, cola, kirsch and black raspberry in the 1995 Le Pin.) 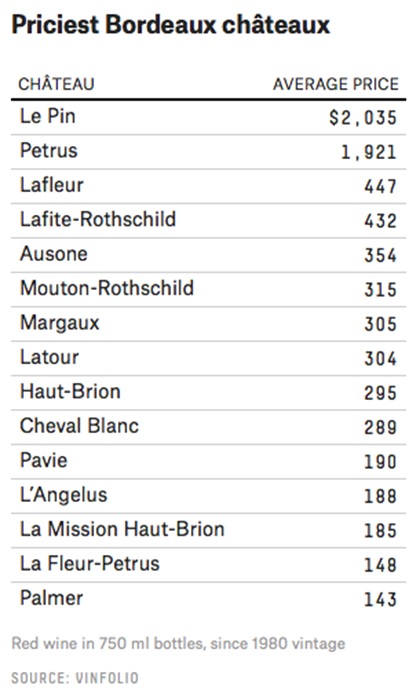 In addition to the scarcity of wine from a producer such as Le Pin, there is also a strict hierarchy of pedigree influencing prices in Bordeaux. In 1855, in preparation for the Universal Exhibition in Paris, a group of French courtiers, at the behest of Napoleon III, ranked the region's wines -- a sort of viticultural, Second Empire version of the U.S. News & World Report college rankings. Five chteaux -- Lafite, Latour, Margaux, Haut-Brion and Mouton -- are designated premiers crus, or first growths, the Ivy League of the 19th-century wine world. Fifty-three other producers are also ranked in categories ranging from deuximes crus (second growths) down to cinquimes crus (fifth growths). This classification consisted of wines from the Medoc and Graves regions of Bordeaux, both on the Left Bank. (The Koch sale was heavily Francophile, with both first and second growth Bordeaux attracting heavy bidding.) 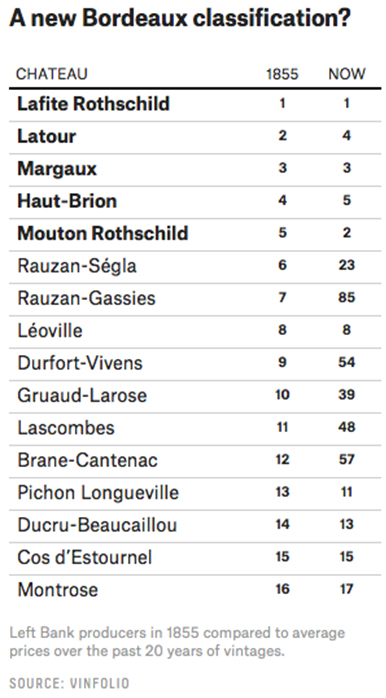 It's remarkable how accurate -- or how persistently self-fulfilling, or both -- those classifications continue to be. In the table are the original 1855 rankings, compared with the average-price rankings of chateaux in those same subregions over the past 20 years of vintages. If the classification were redone with price as the guiding light, the five first growths, highlighted in the table, would remain exactly the same. There's been more change when you move further down the list, but a handful of the second growths would remain just the same, too.

All five of the first growth chateaux, and many of the second, were heavily represented at the Koch sale in New York.

Another famed wine-producing region in France is Burgundy, in the east. While Bordeaux is known for its Cabernet Sauvignon and Merlot reds, Burgundy is known for its Pinot Noir reds and Chardonnay whites. The two regions are the wine world's "dueling colossi." Data is unlikely to settle any matters of oenological taste, but it can provide dueling summaries. In this case, it reveals two wine regions that appear, quantitatively, quite similar: Ages and quantities sold at auction mirror each other closely, as does the price increase as the regions' wines age.

But the psychophysiological effects are purported to be quite different. One region speaks to the super-ego, the other to the id. "Aspects of Bordeaux appeal to the aesthete, as Burgundy appeals to the sensualist," Hugh Johnson wrote in "The World Atlas of Wine."

Moving stateside: The Vinfolio data includes 2,345 California producers and nearly 43,000 wines. Relative to France -- and to the Romans -- the United States' West Coast is a relative newcomer to the wine game.

There's also a New World version of the Bordeaux-Burgundy rivalry in California: Napa versus Sonoma. The two regions are of fairly equal size and share a border. They're also similar in age, getting their starts in the mid-19th century. The two stand out in an array of nine of California's main wine-producing regions. 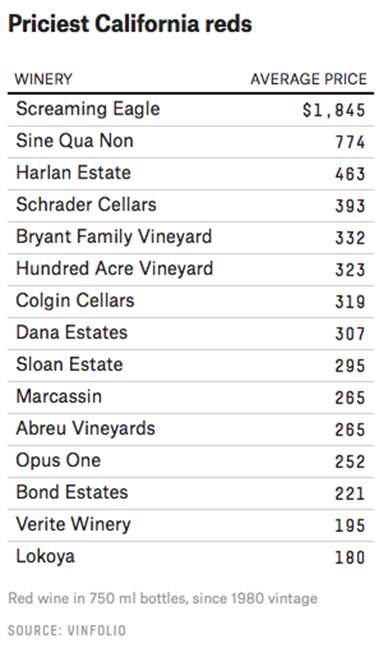 But despite its junior status, California has scored major wine victories. In 1976, top French Bordeaux wines went up against top Californian Cabernet Sauvignon wines in a blind taste test that came to be known as the Judgment of Paris -- an intercontinental, blue blood Pepsi Challenge. The Californians won in a rout.

The most expensive bottle in California -- from Screaming Eagle, in Napa, a so-called cult wine -- rivals the average price of the most expensive in France. Like Le Pin, it's a small winery, producing just a few thousand bottles each year. (Unlike Le Pin, it was absent from the Koch sale.)

"It's sort of secretive. Not secretive in a bad way," Hammer said of Screaming Eagle. "You couldn't walk into a wine store and get it off the shelf. You couldn't drive to the winery and purchase it. The only way to get it was to be on this very small mailing list." (Screaming Eagle declined to comment for this article.)

There's lively viticulture outside of France and California, of course. Germany has its Riesling, Argentina its Malbec, Australia its Shiraz, and South Africa its Pinotage. The near-infinite combinations of soil, climate, botany, culture and method produce near-infinite expressions of wine. The Koch sale was French-centric with a smattering of California, but even the billionaire deigned to collect Pingus from Spain, Penfolds Grange from Australia and Bruno Giacosa from Italy. Lo! Time, fruit and money around the world, over the past century:

"We observe that people's preferences in blind tastings are actually inversely correlated with price, i.e., on average, when they don't know what they're drinking, people prefer cheaper wines," Goldstein said.

But maybe it's not about the wine at all. Maybe you can actually taste the money. A 2008 paper found that telling people a wine cost more than it did resulted in more positive reviews from the drinkers. But, moreover, a higher faux price increased "blood-oxygen-level-dependent activity in medial orbitofrontal cortex, an area that is widely thought to encode for experienced pleasantness during experiential tasks." More expensive wine may actually taste better, for literally no other reason than the price on its sticker.

But a historic producer and blockbuster auction sales aren't necessary conditions for oenological enjoyment. Many, many wines are outside the database entirely. In eastern Iowa, for example, in a region now known as the Upper Mississippi River Valley Viticultural Area, just outside of Baldwin (population: 106), my uncle makes wine. Good wine. He makes it where my grandfather, and his grandfather before him, once farmed. Corn and cattle. The winemaking started as a hobby in the farmhouse basement -- proto-homebrewers, my family. Grapes there aren't the varietals with which most are likely familiar, your Cabernets and Pinots. They're thicker-skinned, to withstand the harsh Midwest winters, and go by names like St. Croix, LaCrosse and Marechal Foch. My uncle's bottles go for about $14. You won't find it in any of the charts above. But we drink it. And we are happy.
Related topics:
food & drinkdistractionbuzzworthywinewine industrytrendingwatercooleru.s. & worldfivethirtyeightalcohol
More Videos
From CNN Newsource affiliates
TOP STORIES