ABC7 I-TEAM INVESTIGATION
WLS
By Chuck Goudie, Barb Markoff and Christine Tressel
ROUND LAKE PARK, Ill. (WLS) -- A federal lawsuit was filed Thursday by police officers in suburban Round Lake Park, alleging an invasion of privacy after their body cams recorded them non-stop - even during bathroom breaks, the I-Team has learned.

Officers in the Round Lake Park Police Department want nearly $10 million after some very raw video that was taken of them by their own body cameras. An unexplained malfunction caused the officer's lapel cameras to record all the time for eight-and-a-half months before anyone found out.

The promo video for the product used by the department promises officers would never miss an incident. Last month, when the I-Team first reported that Round Lake Park body cams were recording all the time -- even when officers didn't know they were on -- department officials told us they had no idea how it happened but they ceased using the body cams.
Nearly a dozen officers filed the lawsuit against Round Lake Park and department brass alleging invasion of privacy "especially considering the recordings included videos of officers' (sic) genitalia, videos of officers defecating in the toilet, changing clothes and other instances where their expectation of privacy is extremely high."

Among those named in the suit is Police Chief George Filenko, who is being blamed for the video camera gaffe. He is accused of knowing about the improper recordings and allowing them to occur.

The suit claims they were offensive and voyeuristic videos that caused "great anguish, shame, anger, severe emotional distress, humiliation. Feeling of being violated and injury to their right to privacy."

Officers said they have been humiliated and embarrassed by the videos and are demanding a jury trial.

Filenko told the I-Team on Thursday that Round Lake Park hasn't received a copy of the lawsuit and it would be premature to comment. Filenko said they are awaiting completion of an independent investigation of the body camera debacle.

Half the police departments across the U.S. use similar body cams.
Related topics:
round lakei teambody cameras
Copyright © 2020 WLS-TV. All Rights Reserved.
RELATED 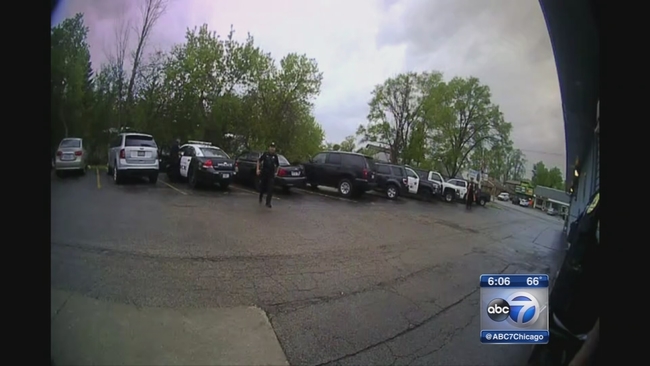 What happens when police body cams don't shut off?
I-TEAM