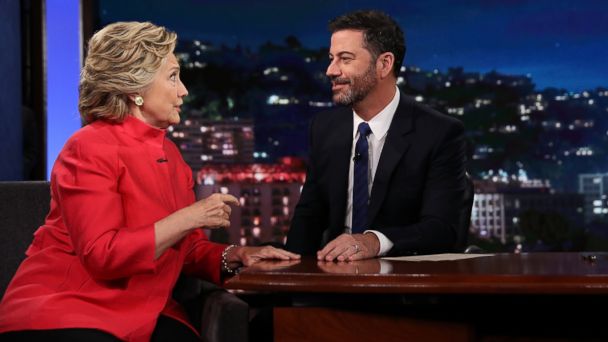 First, Kimmel quizzed the Democratic presidential candidate about news that broke earlier in the day of the release of additional emails from the time she served as secretary of state.

"The state department said that they have to release 15,000 emails by the deadline is a couple of days before the debate," Kimmel said. "Are you concerned about that?"

"No," Clinton responded. "Jimmy my emails are so boring. And I'm embarrassed about that. They're so boring. So we've already released, I don't know, 30,000 plus so what's a few more."

When Kimmel asked Clinton about the rumors swirling about her health, she offered up her hand and said "take my pulse."

Kimmel agreed as Clinton explained "to make sure I'm alive." That's when Kimmel took her hand and gasped telling the audience "oh my god there's nothing there."

Clinton played off Kimmel's words, implying that the stories are baseless. "With every breath I take, I feel like it's a new lease on life," Clinton quipped sarcastically.

Last week during a speech about terrorism, Donald Trump said the former secretary of state "lacks the mental and physical stamina to take on" ISIS. Trump also went after the length of Clinton's speeches, saying she'd rather "go back home and go to sleep."

Donald Trump surrogate Rudy Giuliani continued that attack on Fox News Sunday when he told the audience to "go online and put down Hillary Clinton Illness and take a look at the videos for yourself."

Clinton called the Republican nominee's health attack a "wacky strategy" and chalked it up to the "crazy things," said by Trump and his allies.

"It absolutely makes no sense," Clinton said. "I don't go around questioning Donald Trump's health. I mean as far as I can tell, he's as healthy as a horse."

At one point during the interview, Kimmel asked Clinton to open a jar of pickles to prove how healthy she is.

The two also discussed how the former former first lady was preparing to debate the billionaire businessman.