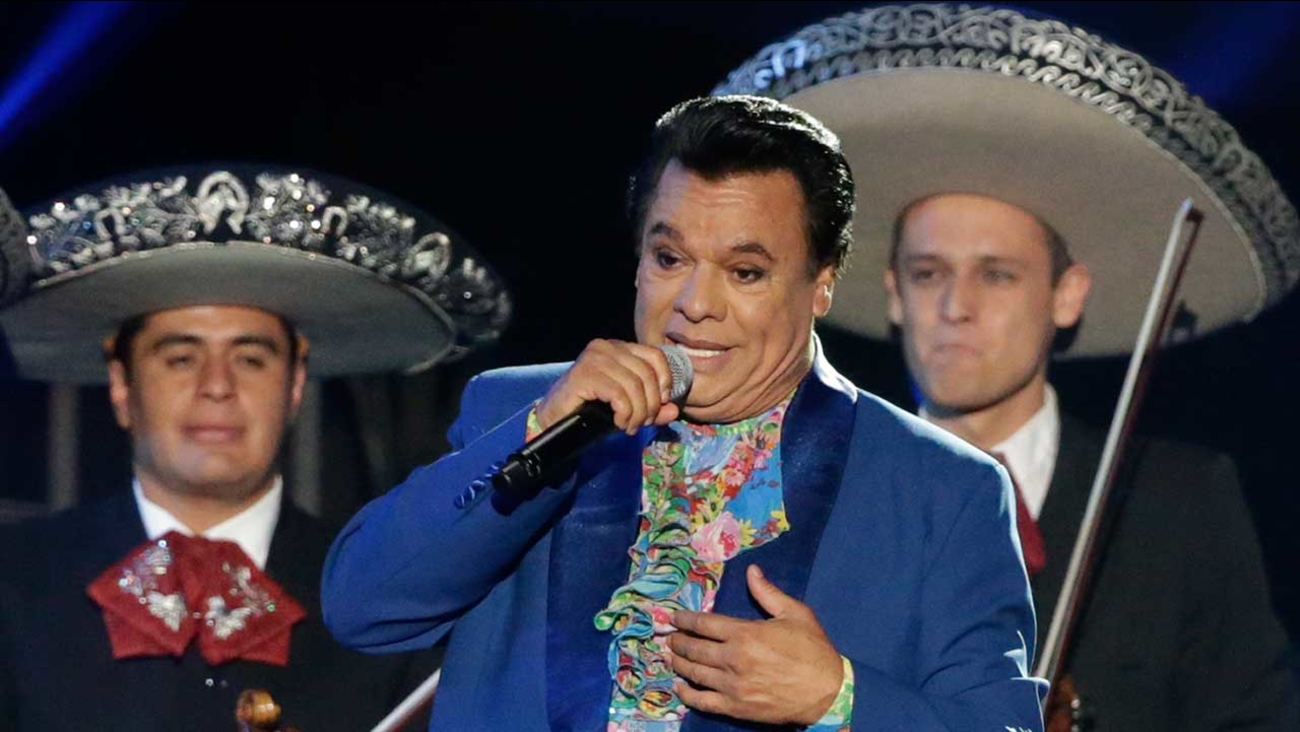 MEXICO CITY (WLS) -- Juan Gabriel, a superstar Mexican songwriter and singer who was an icon in the Latin music world, died Sunday at his home in California at age 66, his publicist said.

Juan Gabriel was Mexico's leading singer-songwriter and top-selling artist. His ballads about love and heartbreak and bouncy mariachi tunes became hymns throughout Latin America and Spain and with Spanish speakers in the United States.

He brought many adoring fans to tears as they sang along when he crooned his songs about love and heartbreak, including his top hits, "Hasta Que Te Conoci" ("Until I Met You") and "Amor Eterno" ("Eternal Love"). His hit "Querida" ("Dear") topped Mexico's charts for a whole year.

A flamboyant performer, Juan Gabriel, whose real name was Alberto Aguilera Valadez, liked to wear jackets covered in sequins or dress in shiny silk outfits in hot pink, turquoise blue or canary yellow, and he was known for tossing his head before dancing or jumping around the stage.

"He has passed on to become part of eternity and has left us his legacy through Juan Gabriel, the character created by him for all the music that has been sung and performed all around the world," his press office said in a statement.

It gave no details on his death. Publicist Arturo de la Mora told The Associated Press that he died at 11:30 a.m. in his home. He said the family would provide a statement later.

Juan Gabriel performed to packed auditoriums, including New York's Madison Square Garden and the Kodak Theater in Los Angeles. His last concert was Friday night at the Forum in Inglewood, California. He was scheduled to perform Sunday in El Paso, Texas.

Mexican President Enrique Pena Nieto said through his official Twitter account: "I regret the death of Juan Gabriel, one of the great musical icons of our country. My condolences to his relatives and friends."

Juan Gabriel broke ground in Mexico in 1990 by becoming the first commercial singer to present a show at Mexico City's majestic Palace of Fine Arts, until then a forum reserved for classical musicians. The proceeds from the three sold- out concerts went to support the National Symphony Orchestra and became his most celebrated performances. His album "Juan Gabriel live from the Palace of Fine Arts" set record sales.

A six-time Grammy nominee, Juan Gabriel was inducted into the Billboard Latin Music Hall of Fame in 1996 and received countless industry awards, including ASCAP Songwriter of the Year in 1995, Latin Recording Academy's Person of the Year 2009, and a star on the Hollywood Walk of Fame that same year.

"There are no rules when I compose songs," he said, according to a biography published by Mexico's Society of Music Authors and Composers. "There are times when I'm really happy and I write something really sad, and vice versa."

Artists across Latin America and in the United States covered many of his songs, including Paul Anka and Marc Anthony, who broke into the salsa music world in the U.S. with Juan Gabriel's "Hasta Que Te Conoci." Juan Gabriel also wrote and produced albums for artists such as Mexican singer Lucha Villa and Spain's Rocio Durcal.

The youngest of 10 children, he rose rags to riches. He was born in the western state of Michoacan. His father, Gabriel Aguilera, was a farmer and his mother, Victoria Valadez, a housewife. The family lost contact with his father after he was taken to a psychiatric hospital in Mexico City when Juan Gabriel was still a baby. Unable to support her children, his mother moved the family to the border city of Ciudad Juarez, where he grew up as she worked as a maid.

Juan Gabriel said his mother was one of the people he most loved in his life even though he spent most of his childhood away from her. Unable to care for him, she sent him to an orphanage.

He said he wrote "Eternal Love," one of his greatest hits, thinking about his mother, who died in 1974.

"Even though I don't have my mother's love today, I have the love of millions," he told the newspaper La Jornada in an interview in 2012. "Her love comes through all the mothers of Mexico."

He went to school only until fifth grade after he escaped the orphanage, where he met music teacher and mentor Juan Contreras. He said his artistic name came from Contreras and his father.

He traveled to Mexico City as a teenager and slept on the streets and in train stations while trying to break into the music business.

During that time he was accused of robbery and sent to jail. "I was good writing songs, but I was innocent for many other things and when I ended up in jail I didn't know how to defend myself," he told La Jornada.

The prison director and his wife helped get Juan Gabriel freed.

He signed his first record contract in 1971 and had his first big hit with "No tengo dinero" ("I don't have any money"), according to his biography by Mexico's Society of Music Authors and Composers.

At the height of his fame, he had problems in Mexico and the United States for not paying taxes. He was also linked to the Cali drug cartel when Fernando Rodriguez, son of Colombian drug trafficker Gilberto Rodríguez Orejuela, wrote in his book "The Son of Chess Player" that Juan Gabriel sang at a party in Colombia for the cartel leaders. The singer denied the claim.

Juan Gabriel rarely gave interviews. When he did, he avoided talking about his private life.

Although his former personal secretary, Joaquin Munoz, described their homosexual relationship in a book, "Juan Gabriel and I," the singer neither admitted nor denied being gay. His fans were surprised when years later it became known that he had fathered four children with his friend Laura Salas.

"I'm not married; I don't ever plan to marry. I'm happy single," Juan Gabriel is quoted as saying in his biography by Mexico's Society of Music Authors and Composers. "I have many loves but the most important are: my mother, my children, my sister, my brothers, my nieces and nephews and my songs."

Juan Gabriel's son Ivan Aguilera issued a statement that read: "My father's untimely passing is a tragic loss for all of us, his family, colleagues, and fans alike. We give heartfelt thanks for the outpouring of condolences we have received from around the world including from President Enrique Pena Nieto. We know that our father will miss entertaining his countless fans, who brought him tremendous joy in life."
Related topics:
societyu.s. & world
Copyright © 2021 WLS-TV. All Rights Reserved.
More Videos
From CNN Newsource affiliates
TOP STORIES