Ahead of inauguration, thousands rally for immigration and civil rights 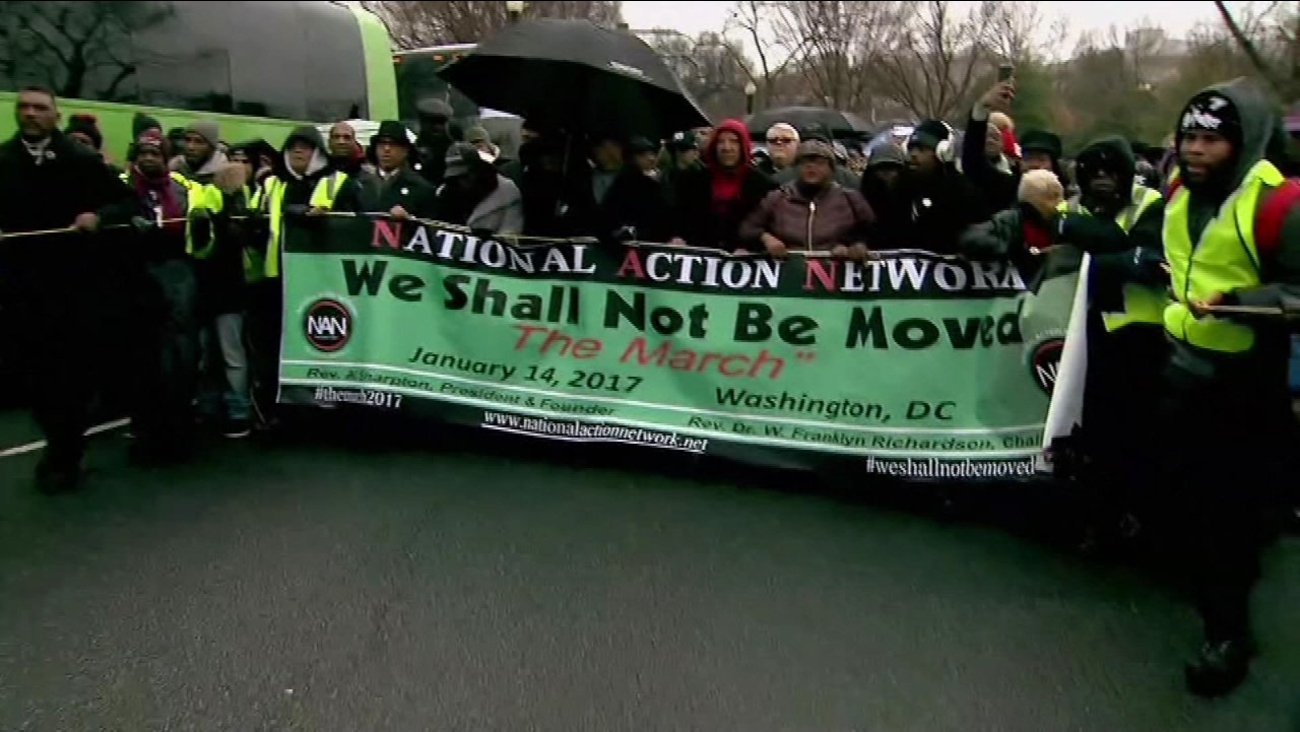 Thousands rallied in Washington Saturday less than a week before President-elect Donald Trump takes office to make clear their opposition to his policies on immigration and social justice.

At the other event, a march organized by the Rev. Al Sharpton's National Action Network and more than a dozen other groups, speakers criticized Trump's nomination of Alabama Sen. Jeff Sessions to lead the Justice Department, fearing that he will reverse Obama administration policies on civil rights. Marchers also demanded action on social justice issues, including mass incarceration and voting rights, while also honoring the legacy of Martin Luther King Jr., whose birthday is commemorated this weekend ahead of Monday's federal holiday.

"Our communities feel under attack," Sulma Arias of the Fair Immigration Reform Movement said at the immigration protest. "The day after the election, kids were waking up in the morning afraid to go to school because of the tension that this election caused and the rhetoric used in this election."

Those packed into the church were joined by allies at around 70 similar events nationwide, according to Fernanda Durand of the advocacy group CASA.

"Many who are like me feel ashamed of their status," said 19-year-old Max Kim, who came to the US from South Korea at age 5 and learned of his undocumented status when in high school. "We cannot be afraid of standing up for ourselves because that only allows the ignorance and hatred to go unchecked. Silence is no longer our safety."

Attendees voiced concerns that the end of President Barack Obama's tenure meant the end of protections like the Deferred Action for Childhood Arrivals program for young people without legal status. Candidate Trump at one point advocated for a "deportation force" to remove those without legal status, though House Speaker Paul Ryan told CNN this week Trump is more concerned with "the people who are violent criminals, repeat offenders who keep coming back in."

"One thing we're going to make clear to Mr. Donald Trump is that every year, 1 million Latinos turn 18," said Rep. Luis Gutierrez, D-Illinois, referring to US citizens. "And we're going to register them to vote."

At the immigration rally, civil, political and religious leaders pledged to speak up and mobilize supporters, even as the comprehensive immigration reform they may desire appears out of reach for the near future.

"We're here to stay and we're ready to say we're not going to get pushed around as immigrants," said Durand of CASA.

Meanwhile, thousands braved rain and cold to march from the nearby Washington Monument to the Martin Luther King Jr. Memorial to send a message in support of civil rights and social justice.

The march, which was co-sponsored by the NAACP, was capped by a rally in Washington that attracted speakers from advocacy groups, the local government and the Senate.

Among the speakers were Sharpton, Sen. Jeff Merkley of Oregon, President of the National Urban League Marc Morial, and Washington Mayor Muriel Bowser.

Cornell Williams Brooks, president of the NAACP, had strong words for Trump. Responding to Trump's comments earlier Saturday to civil rights icon and Georgia Rep. John Lewis, Brooks called Trump's comments disrespectful and asserted that Lewis was an "icon of the civil rights movement" who came "perilously close to becoming a martyr" because of it.

Evoking the civil rights leader himself, Sharpton urged the crowd to join him.

"We need to make some house calls. We need to stay a little while. And we need to stay in their office while they're on the floor voting here because Dr. King died fighting for these rights," he said.