Boy, 17, charged in killing of Glenview teen, is suspect in another shooting

WLS
By Sarah Schulte
DES PLAINES, Ill. (WLS) -- A 17-year-old boy has been charged in the shooting death of a popular north suburban high school student at an apartment complex Saturday night.

The boy is being charged with involuntary manslaughter as a juvenile.

Police say the teen and Morris were in a room together when the teen, who lived at the apartment, was handling a gun and it discharged, firing a bullet that fatally injured Morris, who was his girlfriend, he said.

Morris' family left Cook County's juvenile court building Wednesday furious that the teen charged in the girl's death is not being tried as an adult.

Prosecutors say while the teenage boy does not have any prior convictions, he is a suspect in another shooting. The teen's lawyer says his client is not only on the honor roll, but plays on his high school football team. He remains in custody until his next court appearance on Monday.

The 17-year-old honor roll high school student told police he accidentally shot Morris in the eye while checking his gun to make sure it worked properly. The shooting took place inside his Des Plaines garden apartment. The teen told police the clip was on his bed when he pulled the trigger. Although, prosecutors say the gun cannot discharge without the clip.

"He had to have grabbed it, put it in, shoot her - these actions are not a mistake," said Morris' sister Katie Humphrey.

"They are going off what this family said happened that day - the one person who knows we can't even ask her," Blaje said.

Morris' family is not only pushing for the 17-year-old to be charged as adult, they also want the charges upgraded from involuntary manslaughter.

While Morris kept her relationship with the boy secret, he says she was his girlfriend.

The teen told police he kept a gun for protection.

"Why is it OK for his mom, grandma, his family members, feel it is OK for him, as a minor, to have a weapon in his house?" Blaje asked.

Cook County sheriff's police were called to the complex in the 9900 block of Linda Lane and found Morris with a gunshot wound to the head, according to the sheriff's office.

Morris, a resident of unincorporated Glenview and a senior at Glenbrook South High School, was taken to Lutheran General Hospital in Park Ridge, where she died at 4 a.m., according to the Cook County medical examiner's office.

In a post on Facebook, Blaje wrote that Morris was known for the "love and kindness you shared with others ... always making us laugh with your silliness ... a smile that could warm our hearts."

In a post on a GoFundMe page set up to help the family with funeral expenses, Morris' sister Katie Mason said she was "accidentally shot in the head, the bullet hit her on the eyebrow and went through her head," causing her to "bleed to death."

An autopsy Sunday found Morris died of a gunshot wound to the head, according to the medical examiner's office. Her death was ruled a homicide.

"Angie was only 17 years old and was looking forward to graduate in January and still walk down the stage with her class," Mason wrote. "She wanted to pursue her dream in becoming a special ed teacher."

Morris had texted her new cell phone number to Humphrey just a few hours before she was killed. Later that night, Humphrey got a devastating call.
"My brother called me on the phone saying she got shot in the head and I needed to go the hospital with my mom," Humphrey said.

Family members said Morris was in a basement apartment with a friend when she was shot.

"She was very outgoing. She was dedicated to school. She wanted to be a teacher for special education," said Humphrey.

In a statement sent out to Glenbrook South parents in a letter, Principal Lauren Fagel wrote: "It is with great sadness that I share this news. Angie Morris, upcoming senior, passed away early Saturday morning. Angie was a sweet, caring, and determined young woman who was looking forward to graduating in January 2018 to pursue a career in early childhood education." 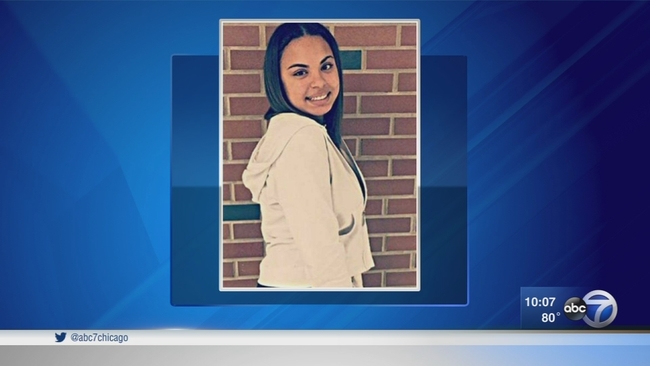