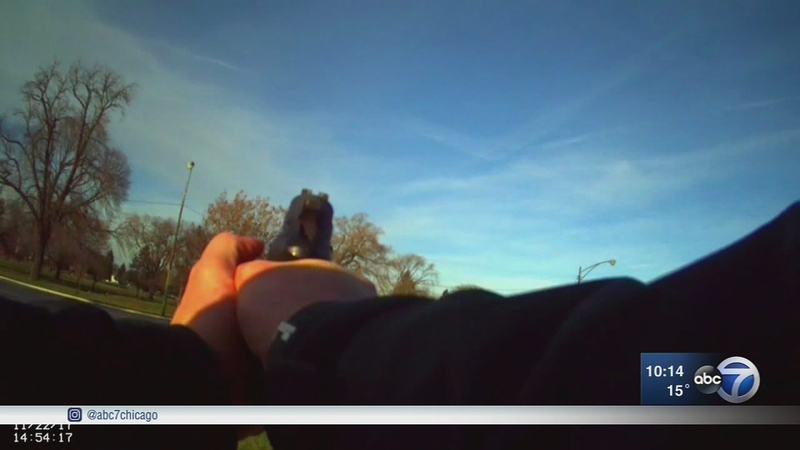 CHICAGO (WLS) -- Police, funeral directors and cemetery owners are dealing with what they say are raucous and increasingly dangerous funeral processions that start in the city and end in the suburbs, a threat to mourners and anyone in the way.

Most funerals and burials are reverent and safe, but sometimes the emotionally charged events result in violence.

In the video, police arrested 56-year-old Elston Stevenson. Prosecutors said that while at a graveside service with mourners looking on, Stevenson said, "You deserved it" as he fired a single shot into the grave of a Palos Height man recently murdered in his home.

No one was struck by the gunfire. Stevenson, who has been convicted of multiple felonies, has pleaded not guilty to gun charges.

Evergreen Park Police respond to reports of shots fired at Evergreen Cemetery on Nov. 22, 2017. Elston Stevenson, 56, was charged. He pleaded not guilty.

"It's what we are dealing with now, I mean, they have taken funerals to a different level," said Hillside Police Chief Joe Lukaszek.

Just a month after the Evergreen Park incident, Hillside received reports of gunshots and highway mayhem as a funeral procession headed to the village.

"I saw a gun in the gentleman's hand that was driving the car. I just couldn't in good conscience let that car get on the highway," Lukaszek said.

Dramatic dashcam video shows the chief ramming his SUV into the suspect's car; they are then seen trying to flee. Four suspects were taken into custody.

Chief Joseph Lukaszek details the pursuit and decision to ram an SUV reported to be involved in multiple shootings on December 5, 2017.

Authorities tell the I-Team the dangerous and disrespectful funeral processions and out of control behavior has been going on for years.

More recent incidents prompted religious and community leaders to call for tougher laws this past Spring.

"A gentleman went up to the casket, somebody came up to him. They thought he was the one that killed the person, so they stabbed him in the funeral home," said June Williams, funeral director.

Joseph A. Russo of Russo's Hillside Chapels recalled seeing a herd of people come streaming out of a cemetery in Hillside this past summer.

"People were just running across Roosevelt Road and running for their lives. People actually got shot in a cemetery on a funeral, Russo said."

Police and funeral homes have stepped up security at suspected gang-related services. And at a recent continuing education meeting for the Cook County Funeral Directors Association a lawyer discussed what would be required if a funeral director wanted to arm themselves.

"You know when we're being trained on considering concealed carry for funeral directors, and that's up to us for whatever reason -- it speaks for itself," said Eric Hoffman, funeral director in the Chicago area.

Officials with Catholic Cemeteries have recently convened meetings to come up with new methods to deal with isolated violent funerals.

Roman Szabelski, the Executive Director of Catholic Cemeteries, said they are talking with funeral directors, police clergy and others to come up with new strategies to prevent the violence and raucous behavior. He stressed, cemeteries and funerals are over all peaceful and safe places, "This is a very small part of what goes on in cemeteries," said Szabelski .

Concerns about the sporadic violence prompted Catholic Cemeteries to start conversations with law enforcement, clergy, funeral directors and others.

One strategy that seems to be working is the safety alerts sent out by the Chicago Police Departments. These one page memos are designed to give local law enforcement agencies the heads up when an up-coming funeral may have gang ties.

So, why don't funeral directors just refuse to handle services that are potentially risky?

Spencer Leak Jr., Vice President of Leak and Sons Funeral Homes said they have had very few problems and they almost never turn a family away.

"We go by the model 'founded by God,' then every family that comes to us we consider a gift from God, how do you turn away God's gift," he said.