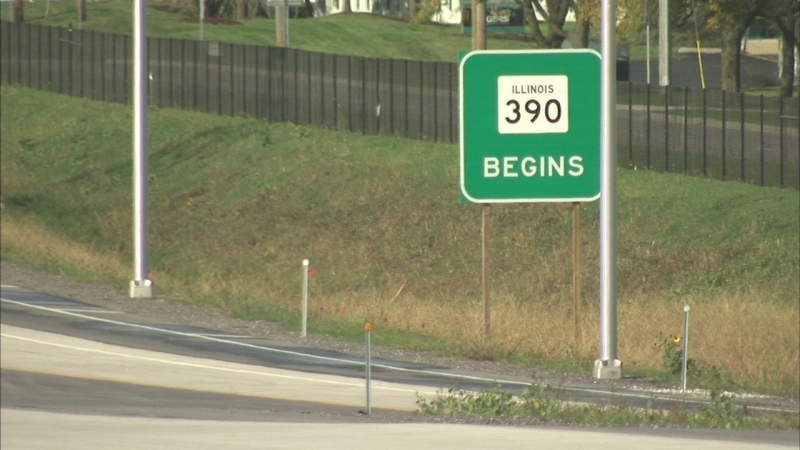 BENSENVILLE, Ill. (WLS) -- The Illinois Tollway is getting ready to open a second stretch of Route 390, making its way closer to O'Hare International Airport.

Previously known as the Elgin-O'Hare Expressway, Route 390 didn't go to Elgin or the airport when it opened in 1993. But it will be one step closer to giving people in the western suburbs a more direct route to O'Hare when the eastern expansion opens next week.

Four more miles of Route 390 will open on Nov. 1, expanding the tollway from Lake Street in northwest suburban Hanover Park to Route 83 in west suburban Bensenville. But drivers should make sure they have I-Pass before hitting the road.

"The more important thing people should know, this is an all-electronic toll road. There is no cash option, unlike some of our other roads. So you either have an I-Pass or you have seven days to go online and pay," Illinois Tollway Executive Director Greg Bedalov said.

The total cost to drive the entire 10-mile stretch of Route 390 will be $1.90. Overhead toll readers will be near the new interchanges at Prospect Avenue, Wood Dale Road and Route 83. Toll collection points will be closer together, but smaller amounts, to reduce the cost of shorter trips.

The new section of tollway will have three lanes in each direction, all LED lighting and safety features, like cable median barriers, and guardrails to prevent crossover and head-on collisions.

Before the new section of 390 opens to the driving public, the tollway will host a free family festival on Saturday.

"I want everybody to come out here in the morning for our Trick, Trot and Roll event. An opportunity for everyone to run, walk, bike or skate this section of the roadway before we open it for general tolling. We're going to have a lot of tents out here, a lot of things for kids to do," Bedalov said.

This event will be similar to the bike ride on the southern extension of I-355 before it opened to the public ten years ago.

Once the eastern extension of Route 390 opens next week, crews will continue some work on the shoulders, including landscaping, to plant thousands of trees and shrubs.