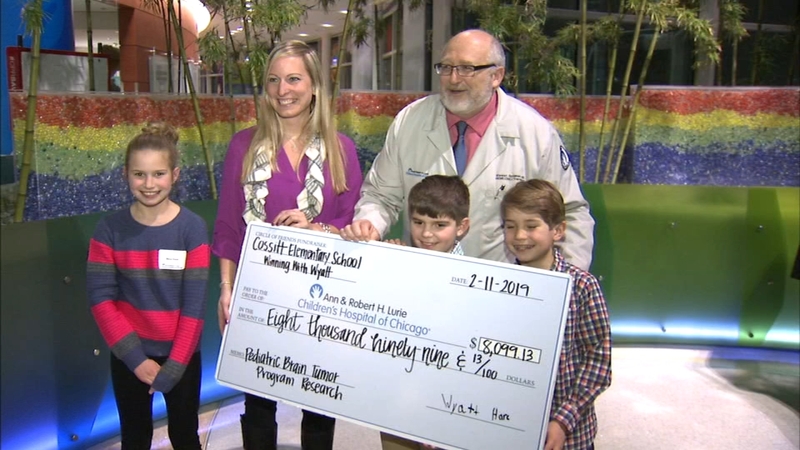 CHICAGO (WLS) -- A boy from La Grange is showing us how small contributions can add up to make a big impact.

His third grade passion project resulted in a big donation to Lurie Children's Hospital, where he was a patient only a few years ago. Eight thousand, ninety nine dollars and thirteen cents, to be precise.

When 8-year-old Wyatt Hare set out to collect coins from his classmates and teachers at Cossitt Elementary, he thought he'd net far less.

But his story was too compelling collect only pennies, and within a week he far-exceeded his goal.

"The whole experience was so inspiring to see how passionate he was about wanting to give back and how everybody in the school really rallied around him," said Erin Peterson, Wyatt's teacher.

Dr. Stewart Goldman accepted the check on the hospital's behalf. He was part of the team that found the tumor in Wyatt's brain two and a half years ago.

"When you see a young man who has gone through his therapy for his brain tumor, has had a scare of a re-occurrence, has had multiple surgeries, and his community, his family - they all rallied together to help us for kids in the future. It really motivates us to work even harder to find better answers," Dr. Goldman said.

Wyatt continues to see his team at Lurie, where his doctors and family alike are thrilled with the progress he's made.

"But he's doing phenomenal now, doing great in school and obviously has a personality that could win over the world," Dr. Goldman said.