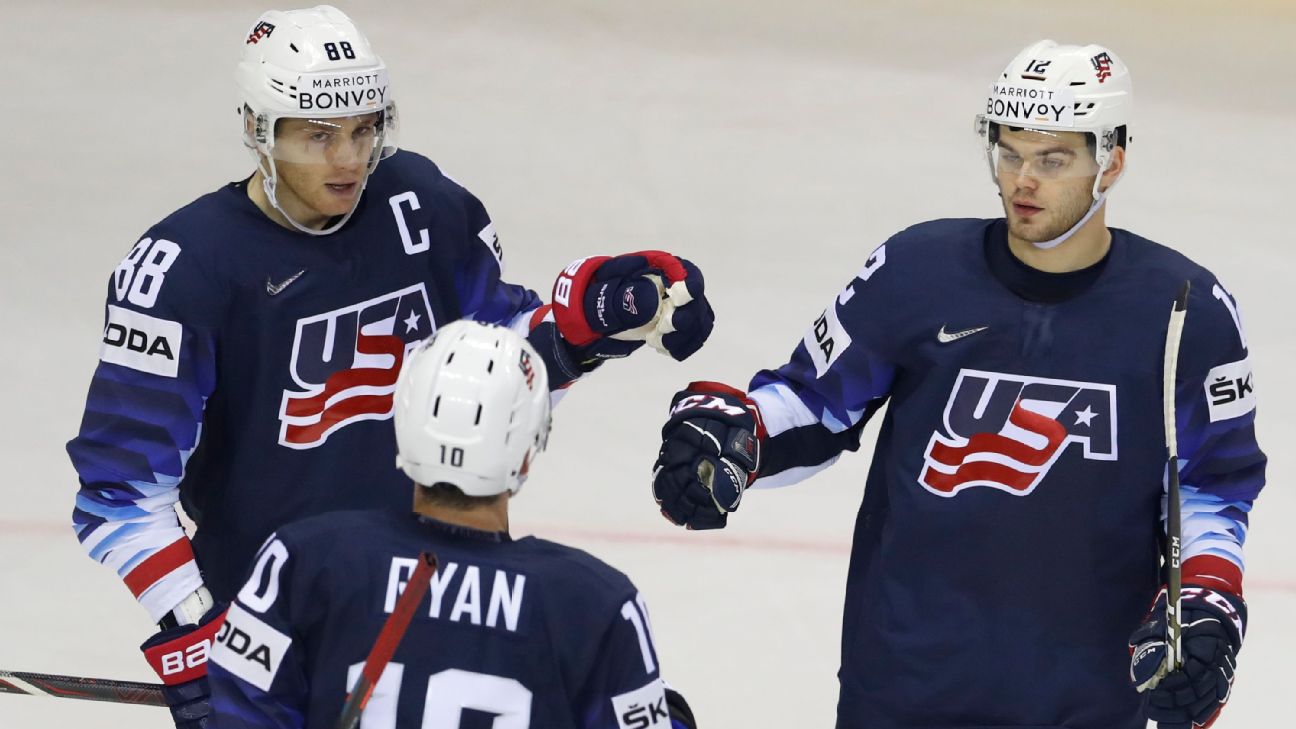 KOSICE, Slovakia --Patrick Kane scored a goal and had two assists to become the United States' all-time leading scorer at the world hockey championship in a 6-3 win over Britain on Wednesday.

The three-time Stanley Cup champion and two-time Olympian finished the game with 36 points, surpassing the 33 points U.S. Hockey Hall of Famer Mark Johnson had in the tournament. Johnson led the Americans with 11 goals when they won Olympic gold in 1980.

"It's special when you think of all the great American players, all the kids that grow up in the USA, dreaming of playing hockey, dreaming of playing for their country,'' Kane said. "I've really enjoyed this tournament. This is my third time over here. It would be really nice to win it more than anything. The personal achievements and accolades are pretty nice, too.''

Kane has helped the U.S. win three straight games in Group A since opening with a loss to the host Slovaks. The Americans have preliminary-round games remaining against Denmark, Germany and Canada.

The British team, which returned to the top division for the first time in 25 years, had a relatively strong showing after losing to Germany by two goals and getting routed by Canada and Denmark. Mike Hammond scored late in the first period to pull Britain into a 1-all tie. The British team scored in each of the three periods against the U.S. after having only one goal and giving up 20 goals in the previous three games.

Switzerland stayed undefeated in Group B, as Andreas Ambuhl scored twice in a 4-1 win over Norway. The Swiss likely will be tested as they close the preliminary round against Sweden, Russia and the Czech Republic.

Germany scored twice over the final 1:52 against Slovakia, rallying to win 3-2 to remain the only unbeaten team in Group A.

Leon Draisaitl scored the game-winning goal with 27.4 seconds left after Markus Eisenschmid pulled the Germans into a 2-all tie late in the third period.

Alex Ovechkin put the Russians ahead by four goals in the first period against Italy, and they went on to win 10-0 in Bratislava, extending a first-place tie with Switzerland in Group B.
Report a correction or typo
Related topics:
sportsespnchicago blackhawksnhlolympic sportsice hockeypatrick kane
Copyright © 2020 ESPN Internet Ventures. All rights reserved.
More Videos
From CNN Newsource affiliates
TOP STORIES