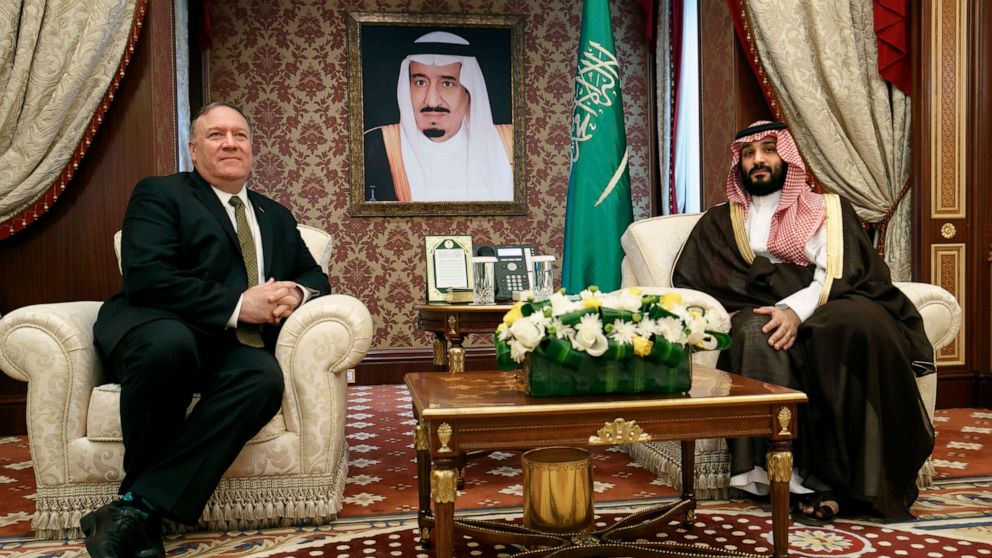 ABCNews
By CONOR FINNEGAN
The murder of Washington Post Jamal Khashoggi did not come up in Secretary of State Mike Pompeo's meeting with the Saudi king on Monday, according to a senior State Department official.

It's the latest sign that the Trump administration has dropped the issue and tried to move past the brutal killing for the sake of what it says is a critical economic and security partnership.

President Donald Trump was dismissive on Friday of Khashoggi, the Saudi dissident who resided in Virginia, when he said that he did not raise a new United Nations report on the murder in his conversation with Saudi Crown Prince Mohammed bin Salman Friday.

"I think it's been heavily investigated. ... By everybody," Trump told NBC News in an interview.

U.N. special investigator Agnes Callamard released a report on Wednesday that found Khashoggi's killing was perpetrated at the highest levels of the Saudi Arabian power structure and requires further investigation of Saudi leadership, including the crown prince.

Khashoggi was killed inside the Saudi consulate in Istanbul, Turkey, last October -- an act that the Saudi government at first denied, then called a mistake and finally blamed on a rogue operation. The hit team has been on trial in Saudi Arabia, although Callamard's report criticized that judicial process as lacking transparency.

Pompeo met both the crown prince and his father King Salman in Jeddah, Saudi Arabia, on Monday. In a brief 15-minute meeting, Khashoggi's killing and other human rights abuses in the country did not come up, according to the senior official, who said they did not know whether it was raised in Pompeo's one-on-one meeting with the crown prince, who is sometimes referred to by his initials "MBS." A readout of both meetings by the State Department spokesperson also made no mention of Khashoggi or broader human rights abuses.

Those abuses were well documented in two State Department reports released last week -- one on human trafficking and child soldiers and the other on international religious freedom. Both reports labeled Saudi Arabia as among the worst offenders on these issues.

Pompeo, who has consistently defended the Saudi leadership and said that the U.S. has to continue to investigate Khashoggi's killing, was traveling to Saudi Arabia and the United Arab Emirates Monday to bolster both partners against the threat from Iran.

Both he and Trump have made clear that the Saudis are critical strategic partners against Iranian activity in the region, including as a customer of U.S. arms.

"Saudi Arabia is a big buyer of America product. That means something to me. It's a big producer of jobs," Trump said.

He denied giving the Saudis a pass on "bad behavior," but argued it was nothing out of the ordinary.

"This is a vicious, hostile place. If you're going to look at Saudi Arabia, look at Iran, look at other countries," he said.

The only difference, he suggested, was that they purchase U.S. weapons: "I only say they spend $400 to $450 billion over a period of time -- all money, all jobs, buying equipment ... Take their money."
Report a correction or typo
Related topics:
abc newsnational
Copyright © 2020 ABC News Internet Ventures.
More Videos
From CNN Newsource affiliates
TOP STORIES