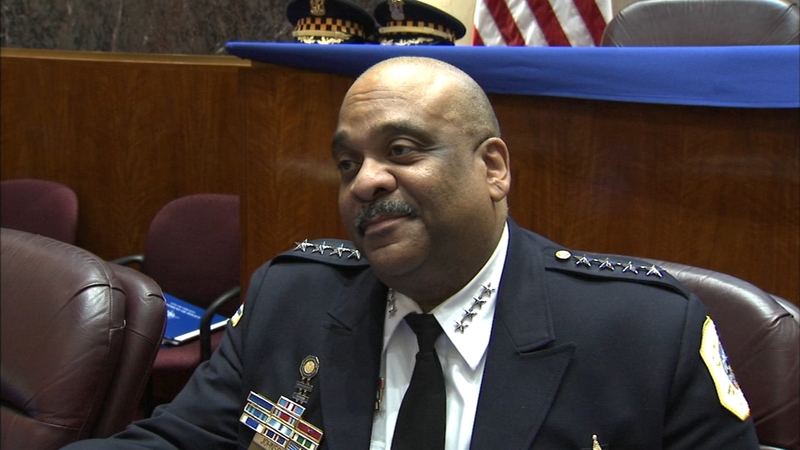 The city's top cop didn't confirm that he's planning to step down, but did say "You know I've been toying with it for sometime," during a break at the CPD 2020 budget hearing on Monday afternoon.

NEW: Police superintendent Eddie Johnson is considering retirement. “You know I’ve been toying with it for sometime” he said during budget hearings today. He says he really started thinking about it after his trip to see the Bears play in London. pic.twitter.com/RFUpmpA9li

"I have given 31 years now to the city and almost four as superintendent," Johnson said. "I recognize also that at some point it's time to create a different chapter in your life."

He added that the job has taken a toll on him and his family. He said he started to contemplate retirement after his trip to see the Chicago Bears play in London last month.

"That London trip really made me realize, especially for them, how much I've given to the city and how much I have taken away from it," Johnson said.

Johnson said that trip was his first vacation since he became superintendent in 2016.

In October, Johnson was found asleep behind the wheel of his car near his home after having a medical episode. The episode was said to be caused by missing his high blood pressure medication.

Mayor Lori Lightfoot said that he told her he had "a couple of drinks with dinner," during a Sun-Times interview.

Johnson was asked if he plans to make up his mind about retirement before the Inspector General issues his report. He also said he wasn't concerned about staying on the job until April, when he will be fully vested in his superintendent's pension.

"The vested part of a pension really has never mattered to me because remember, and let me be clear about something, remember I didn't apply for this job," Johnson said.

During the budget hearing, many aldermen praised Johnson for the job he's doing with keeping Chicago's crime rate down this year.

Alderman Greg Mitchell was asked if he got any sense that Johnson was thinking about Monday.

"I asked him directly and he said, 'No,'" Mitchell said. "I think he feels that he has a lot more to do."

"What I'm saying to you is this I simply said everybody in these positions contemplate those things, I'm no different, but I still have the fire in me for this job, and I'll leave it at that." Johnson said.

Johnson says he has Mayor Lightfoot's support, and does not feel he's being pushed out.

He said his decision has nothing to do with the Inspector General's ongoing investigation of him. Johnson also said he isn't concerned about what the investigation will find about the incident.

City Hall sources expect Johnson could be gone by the end of the month, if not sooner.

Mayor Lori Lightfoot's office released a statement saying, "We are in ongoing conversations with Superintendent Johnson and CPD leadership regarding the Department's strategic plan for the new year and how we can best build on our successes of this past summer into 2020."
Report a correction or typo
Related topics:
politicschicagoloopbudgeteddie johnsonchicago city councilchicago police department
Copyright © 2021 WLS-TV. All Rights Reserved.
More Videos
From CNN Newsource affiliates
TOP STORIES