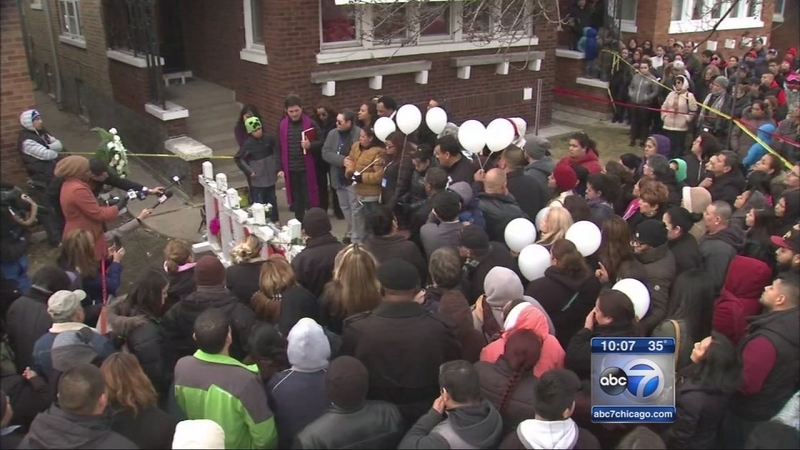 CHICAGO (WLS) -- A prayer vigil was held Sunday afternoon for the six members of a family who were found murdered last week in their Gage Park home.

Emotional relatives of the Martinez family who arrived from Mexico joined mourners outside the home in the 5700-block of South California Avenue.

The only surviving sibling of the Martinez family, Victoria Martinez, joined the grief-stricken crowd. Through her sobs, she said in Spanish, "My God. My God." She said wants to bring the bodies of her parents, siblings, niece and nephew to Mexico.

On the front lawn stand six crosses, decorated with candles and adorned with mementos that have been collecting since the family's bodies were found Thursday.

The father of the young children has not yet arrived in Chicago from Mexico. When he does arrive this week, a memorial is expected to be held.

Meanwhile, police have made no arrests. Investigators returned to the home again on Sunday, taking one of the family's vehicles.

Police said the murder of the family does not appear to be a random act of violence resulting from a home invasion or burglary, a police official said. However, a motive has not been determined. Police said there were no signs of forced entry and the doors were locked. Also, it does not appear anything was stolen.

The vigil drew people who didn't know the family, but felt touched by the tragedy. Others were from the same small town in Mexico and had lost touch with teh family while living in the city.

"Man it's crazy that this happened right by my home," said Alberto Sosa. "It can happen anywhere, anytime. Life is not promised to anyone."

Family members have set up a GoFundMe page, hoping to raise money to help cover the cost.