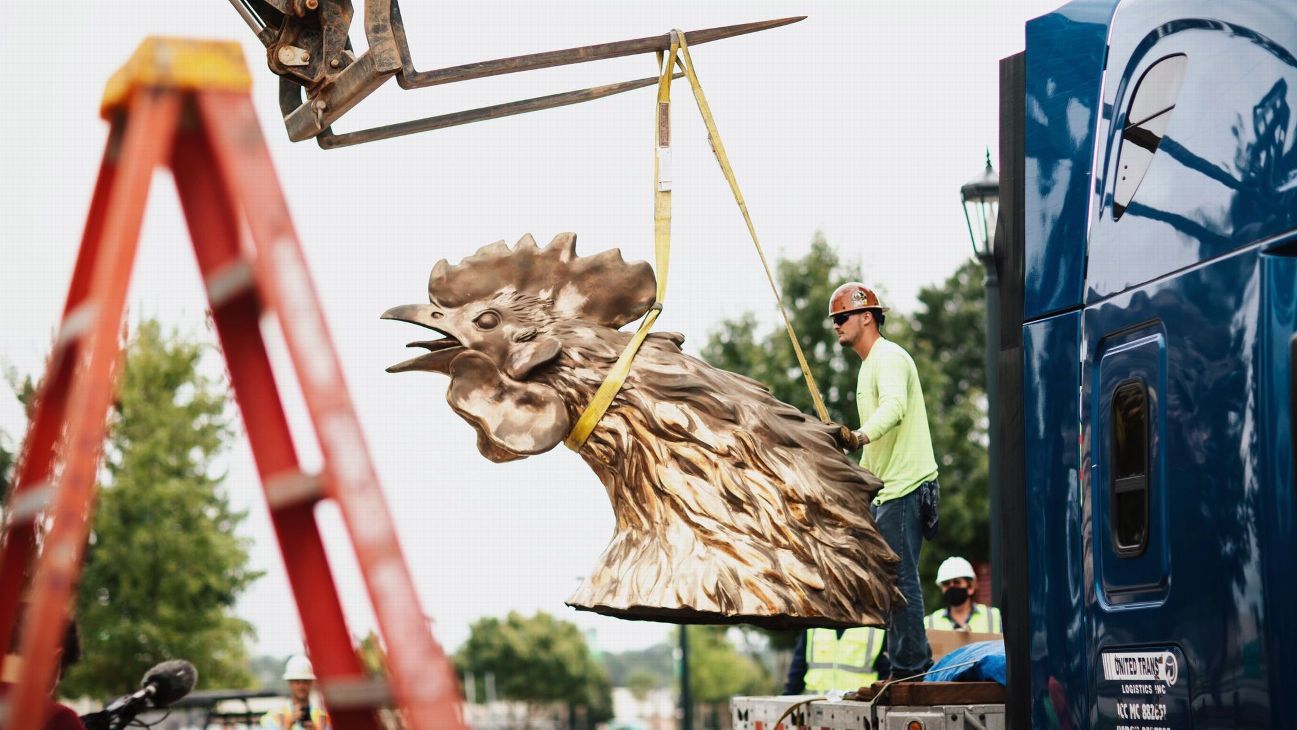 It's just Week 2 of the college football season and we already have ACC conference games on the schedule. Even wilder? ACC rivals Duke and Notre Dame are going at it Saturday.

Yeah, we don't have to tell you this is an unusual season. But witness the glory of D'Eriq King taking flight in Miami on Thursday night and get a little rush of adrenaline.


There's more where that came from this weekend. Not to mention the good stuff we have here, from frog legs to million-dollar, 20-foot-tall chicken statues.

D'Eriq King had a solid debut as Miami's starter, throwing for 144 yards and a score and adding another 83 yards rushing and a touchdown in a win over UAB. Miami rushed for 337 yards as Cam'Ron Harris, Jaylan Knighton and Donald Chaney Jr. joined King with an impressive effort on the ground. But there is plenty of work to do in the passing game and a big test to come next weekend against Louisville. -- Andrea Adelson

The first three quarters were far from ideal for North Carolina. The O-line struggled. Sam Howell threw two picks. There was a plethora of special-teams disasters. It all added up to a 10-6 lead as the fourth quarter began. In the final frame, however, Javonte Williams scored three times and UNC looked completely worthy of all the preseason hype it received. That UNC could pull away so emphatically underscored one of the biggest steps forward for this year's UNC team: There's a lot more depth. The Heels simply wore down Syracuse on both sides of the ball, and the struggles on special teams should be something Mack Brown can work through in practice. -- David Hale

Iowa State has started slowly in recent years under Matt Campbell, then gone on to do solid things. This loss doesn't have to cause massive panic -- the Cyclones are not going to give up two return scores in every game, and usually when you outgain your opponent, you win. This was still a problematic performance, though. Brock Purdy needed a remodeled receiving corps to step up, especially in injured tight end Charlie Kolar's absence -- and it most certainly didn't. -- Bill Connelly

The Mountaineers came into Saturday as an easy Sun Belt favorite but played a tight one against Charlotte. They don't need to be concerned just yet, given Charlotte's improvement the past few years under Will Healy. Returning four starters on the offensive line, App State decided it would run behind that line to a victory, and the plan worked. Three players had at least 13 rushes or more, with Marcus Williams Jr. leading the way with 117 yards and a touchdown.-- Harry Lyles Jr.

The Wildcats couldn't let Arkansas State receiver Jonathan Adams Jr. beat them on Saturday, and that's exactly what happened. Adams had three touchdowns and 99 yards, including the go-ahead touchdown with 38 seconds left in the game. Kansas State had issues with its offensive line -- and even pulled quarterback Skylar Thompson for a series -- but the defense gave up 35 points and allowed 330 yards passing and 159 yards rushing. It's hard to tell if it's getting acclimated to the season or if these are long-term issues, but Kansas State has a lot to clean up moving forward. -- Tom VanHaaren


This was probably an as expected game for a team that had an interrupted offseason, lost some important playmakers from last season, including receiver Chase Claypool and tight end Cole Kmet, and replaced its offensive coordinator. Notre Dame got off to a slow start on offense but eventually started to get into a rhythm against Duke. Freshman tight end Michael Mayer got involved, as did running back Kyren Williams, who was touted by Brian Kelly this offseason. The defense had a better start, showing its speed, and both sides should keep improving with more reps and more games.-- VanHaaren

It might be a new season, but Florida State looked like the same team that has struggled to get to .500 the past three seasons in a 16-13 loss to Georgia Tech. Once again, the Seminoles had offensive line issues, ineffective quarterback play and could not get their running game going. First-year coach Mike Norvell has got a lot of work to do to fix the various issues that have plagued these programs -- starting with finding some answers for the offense, where he has excelled at every other stop. There might not be any quick fixes, though. -- Adelson

There's only so much you can take away from a game in which you were up 31-0 one quarter in and your starting QB didn't play in the second half. Still, despite missing nearly 30 players to suspension and coronavirus guidelines, the Sooners saw the two things they really wanted to see: new quarterback Spencer Rattler in total control and a speedy defense overwhelming Missouri State's offensive front. Rattler was 14-for-17 for 290 and four TDs, and MSU had 37 total yards in the first half. That'll do for now.-- Connelly

Trevor Lawrence and Travis Etienne played like the best quarterback/running back duo in the country in a win over Wake Forest. Were you expecting something different? This might not be a normal season, but the Tigers looked every bit of a national championship contender. They did not get much of a challenge against the overmatched Demon Deacons, but nonetheless Etienne rushed for more than 100 yards for the 18th time in his Clemson career, setting a new school record. Lawrence threw for 351 yards and scored three touchdowns. Clemson has now won 23 straight ACC games.

After opening the season with a 78-yard touchdown pass fromSam Ehlinger to Joshua Mooreon its first offensive play, Texas never really cooled off. The game was over well before the Longhorns took a 45-3 lead into the half in their lone nonconference game of the year. The significant talent gap makes it hard to make any meaningful conclusions about how Texas stacks up against the country's best, but there certainly wasn't anything on display to indicate Texas doesn't have the potential to compete at a high level. -- Kyle Bonagura

If Louisville's offense performs up to its first-half level against Western Kentucky for the rest of the season, they're going to win a lot of football games. The Cardinals' biggest concern should be with special teams, where Western Kentucky was able to disrupt them twice, creating easy points on offense. Outside of those scores, it was an impressively easy 35-21 win for Louisville. -- Harry Lyles Jr.

Spencer Rattler's debut as Oklahoma's new starting quarterback went OK. On his first drive, he was 3-of-3 for 47 yards passing and added 10 yards rushing as he led a touchdown drive. Next trip down the field was a little quicker. One play, one 58-yard touchdown pass to true freshman Marvin Mims.

Charlotte linebacker Peter Agabe said it better than we could. Because we'd injure ourselves in the process.

Stories behind the patches

At the end of July, the NCAA announced teams could wear patches on their uniforms for commemorative or memorial purposes or to support social justice initiatives. Here are some examples of the stories behind them:

(Not so) Breakfast, my friend

The SMU-TCU Iron Skillet rivalry game scheduled for Friday has been postponed indefinitely, but SMU managed a good burn on the Horned Frogs with a little frog leg fry.

On Saturday, the frog leg buzz wore off and Dykes found himself in a bit of a funk.

At long last, the wait is over

Finally, South Carolina's $995,000 golden gamecock statue is being assembled in front of Williams-Brice Stadium. According to The State, it was originally planned for the 2017 season and was fully funded by donors. It'll take two weeks to assemble, but when it's done, it'll be 20 feet tall and will weigh about 19,000 pounds.

The Bobby Petrino era begins at Missouri State on Saturday with a road trip to Norman, Oklahoma, and a game against the Sooners. That's no easy debut. Just remember, if times get tough, you'll always have this video of Petrino throwing a football with a bear.

They liked it, so they put a ring on it

Maybe you've heard of the Turnover Chain, which spawned a lot of shiny imitators. Now, witness the birth of the Touchdown Ring.

We all need a Little Corso

Andrew Williams of Baton Rouge, Louisiana, is a College GameDay superfan, and according to his dad, he asked for a set for his ninth birthday.

The Mountaineers took the uniform reveal to new depths.

They're really teeing off on each other

Is there anything dads love more than golf smack? Even SEC football coaches can't help themselves. 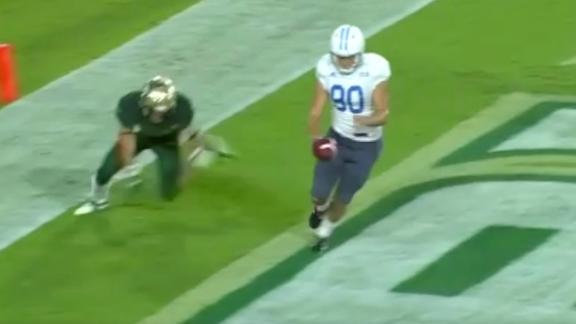 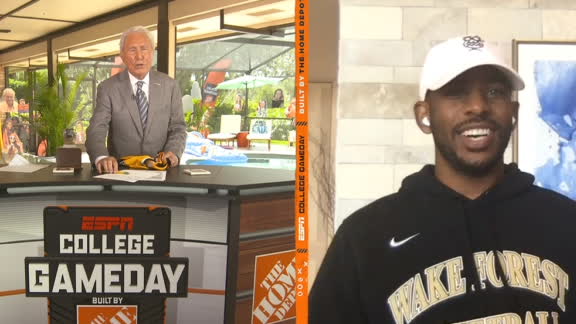 Lee Corso trolls Chris Paul while making his Clemson-Wake Forest pick
Lee Corso makes his prediction for No. 1 Clemson vs. Wake Forest and tells Chris Paul that the Demon Deacons' chances of winning are slim and none. 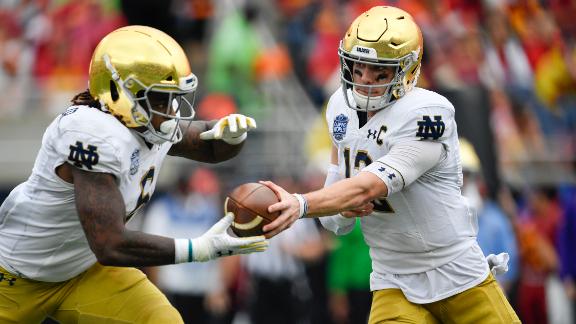