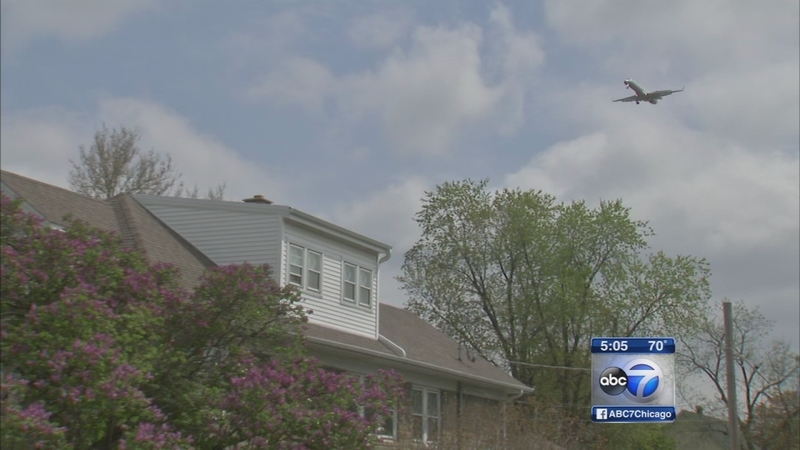 CHICAGO (WLS) -- People who are fed up with the jet noise at O'Hare International Airport are making some noise of their own. They want the city to rethink its redesign.

Pratt Avenue in Des Plaines has heard airport noise before, but not with the regularity it does now. Ed Holtz has called to complain.

"The lady on the other side had to stop the conversation because she couldn't hear it anymore," Holtz said.

O'Hare noise complaints are a fact of life around the airport, but O'Hare's redesign means flights arrive and depart from the east or west. Noise doesn't get spread around as it once did. Neighborhoods that didn't have it before are getting hammered by it now.

The noise complaints are at an all-time high. Darrin Thomas set up a website that directly linked noise anger with a city website. The city website has had trouble handling the load: 1,400 complaints in March of 2014.

Noise opponents say stop the construction and keep the 14-32 runways, as they are known, open to spread the noise.

"We are stating to the city and anybody else, 'Do not destroy, alter or decommission those diagonal runways.' Because we want options to address the issue that faces us," Senator John Mulroe said.

The Illinois Senate passed a measure that would block the city from de-commissioning the 14-32s. The city and FAA have long argued that redesigning O'Hare was about getting away from intersecting runways for safety and efficiency. One congressman says it's not more efficient, but it sure has delivered a lot more noise.

"Folks, there's an easy way to do this. That's to sit down in a room. We should have had these hearings ten years ago," U.S. Rep. Mike Quigley said.

Noise critics said the hearings held by the FAA more than a decade ago were misleading and didn't adequately explain to people in new runway paths that they'd have a steady flow of jets flying over their homes.

There will be four new hearings coming up, but if the diagonals are de-commissioned, as the O'Hare plans calls for, bringing substantive noise relief will not be easy.