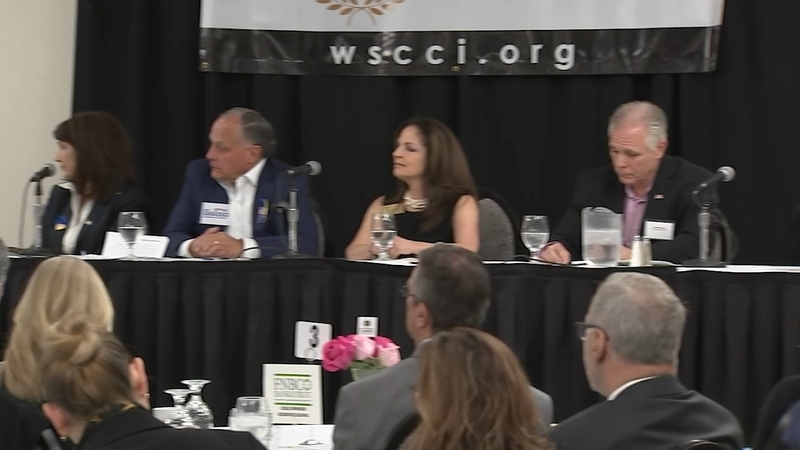 6th District candidates on how abortion could impact election

CHICAGO (WLS) -- The race for Illinois' 6th Congressional District drew a host of candidates to make their case to business and community leaders in the western suburbs Wednesday morning.

With a Jeopardy-style format where candidates got to pick their topics, the issue of abortion only came up once during a forum sponsored by the West Suburban Chamber of Commerce.

"What we are seeing at the federal level is perhaps the unraveling of Roe v. Wade which will send the issue back to the states," Republican candidate Scott Kaspar said.

Candidates mainly opted for questions about other topics, including national security and the economy.

After the Supreme Court's leaked draft opinion suggested the justices were poised to overturn Roe v. Wade, the candidates were split over how much of a factor abortion will be.

"It's been interjected into this race," Republican candidate Rob Cruz said. "It wasn't really an issue that people, when I talk to them in the streets, are worried about education, policing and inflation,"

"You know what I hope is that when people go to the ballot box, they say, number one, am I better or worse off than I was two years ago," Rep. Sean Casten, the Democratic incumbent in the 6th District. "Judge us by our works."

"I think the top issues right now are crime, inflation and the economy. I think that's going to persist all the way through until November," Republican candidate Keith Pekau said.

Republicans are hoping voters are more concerned about issues like crime, and less about the future of reproductive rights.

"In this race, it shouldn't be the issue," Republican candidate Gary Grasso said. "It's our economy, it's all about the crisis on the border, crime here, inflation."

"Whether or not the Supreme Court will release its decision before the primary will really impact how it's going to impact this race," Republican candidate Niki Conforti said.

3rd District Democrat incumbent Rep. Marie Newman, who is now challenging Casten in the 6th after the new maps were drawn, is counting on the abortion issue to be a factor.

"I have bad news for conservatives and for far right wing folks, is that this is going to energize the Democratic base quite well, so I'm excited about that," Newman said.