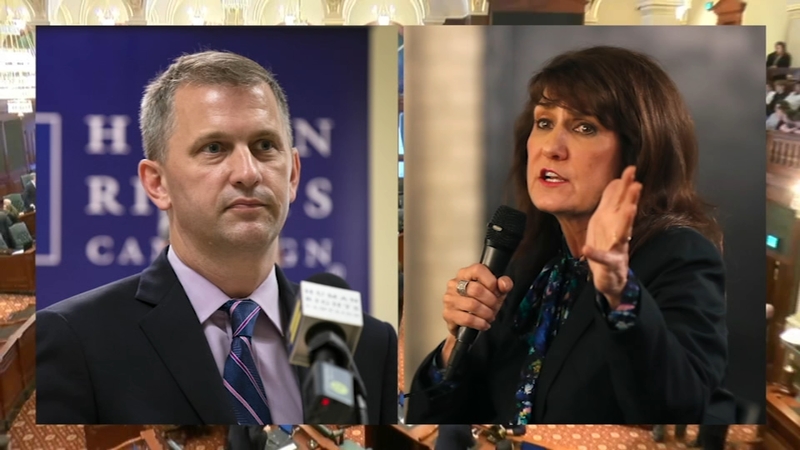 Incumbent Dem. reps. to face off after Illinois redistricting

CHICAGO (WLS) -- There were a few surprises in Illinois politics Friday.

U.S. Rep. Adam Kinzinger announced he will not seek a fifth term next fall.

The Channahon Republican has been a vocal critic of former President Donald Trump.

Kinzinger said he is not done with politics, but didn't say what his next step may be.

The announcement came the day after Illinois lawmakers approved a new congressional map that would have pitted him against fellow Republican Darin LaHood, R-Dunlap.

LaHood announced Friday that he will seek another term in Congress.

Illinois' congressional delegation must shrink from 18 to 17 due to the results of the 2020 census.

Democrats managed to actually give themselves 14 likely seats in the next election.

But at least one incumbent won't be returning to Washington D.C. in 2023.

And on Friday, 3rd District incumbent Marie Newman, D-La Grange, announced she will challenge Casten, D-Downers Grove, for the seat.

Neither is particularly happy with the process.

But Newman, who is serving her first term, may have more reason for optimism.

"So the new Illinois six district. I think that just by sheer geography and population I have more of my current constituents in there. So I think there's a good chance that I have some advantage there," Newman said.

According to maps expert Frank Calabrese, the redrawn 6th District is comprised of 41% of Newman's current district, while Casten keeps only 23% of his constituents.

But Casten, who is serving in his second term, brushed off concerns.

"I'm gonna have to get to know some more folks down south, which is fun; it's a good part of this job. I'm going to have to reintroduce myself, and, you know, tell folks about, you know, why I got into this line of work, why I left the private sector," he said.

Casten, who flipped a longtime Republican district, knows he has his work cut out for him to get reelected. But he said will trust the voters and what he's done.

His showdown with Newman is the result of the third district being redrawn to create a second Hispanic friendly district that stretches from Chicago west into DuPage County.

Newman is also focusing on promoting her own record.

"Most of the geography knows me pretty well. There's a small portion in DuPage County that needs to get acclimated. And we're going to work really hard to introduce ourselves and our ideas to them," she said.