New mural to honor Borinqueneers in Hermosa on NW Side 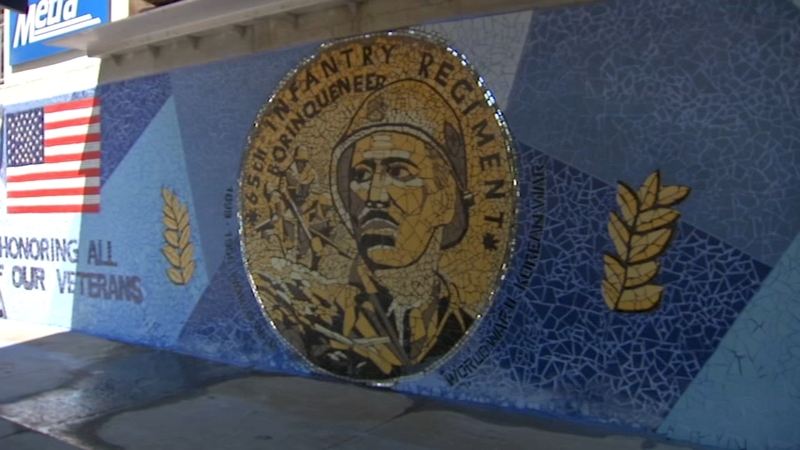 New mural to honor Borinqueneers in Hermosa on Chicago's NW Side

CHICAGO (WLS) -- A new mural to be unveiled this week in Hermosa showcases some of the Chicago neighborhood's rich history.

"It's an honor for me to serve this country," said Lt. Col. Juan Vazquez of the 65th Infantry Regiment.

Vazquez thinks back to his time serving in the Army as a part of the 65th Infantry Regiment, a Puerto Rican unit better known as the Borinqueneers.

"I was so young. You don't even care about being a Borinqueneer or what, the only thing that you plan is to survive no matter which unit you are," Vazquez said. "Live today and tonight and tomorrow, who knows."

Vazquez was one of the remaining Borinqueneers honored by former President Barack Obama in 2014 with the Congressional Gold Medal, a moment that still excites him to this day.

This week, he will be one of several Borinqueneers in the Chicago area on hand for the unveiling of the mural beneath the newly renovated Healy Metra Station.

He wanted to make sure many aspects of the Hermosa neighborhood were highlighted along the walls, everything from the Disney house to the former Schwinn Company. It was Arroyo's special family connection to the Borinqueneers that led him to honor their legacy.

"My uncle fought in World War I and World War II, Pablo Arroyo. That's why I'm wearing the medal now. He was also a awardee of the medal. He passed away though and the family and me would like to honor him and putting that medal up there and honoring everyone that went to the war," Rep. Arroyo said.

Jordan Taggart, program director of the Green Star Movement, said, "We've had Marines, we've had Navy and all types of service men and women stop by, just really appreciative of the message that it sends."

For Vazquez, having the mural highlight the Borinqueneers is an honor.

"I'm very, very proud of that it's something my son and great grandson will see and say, 'Oh my great grandfather was part of that mural,'" Vazquez said.