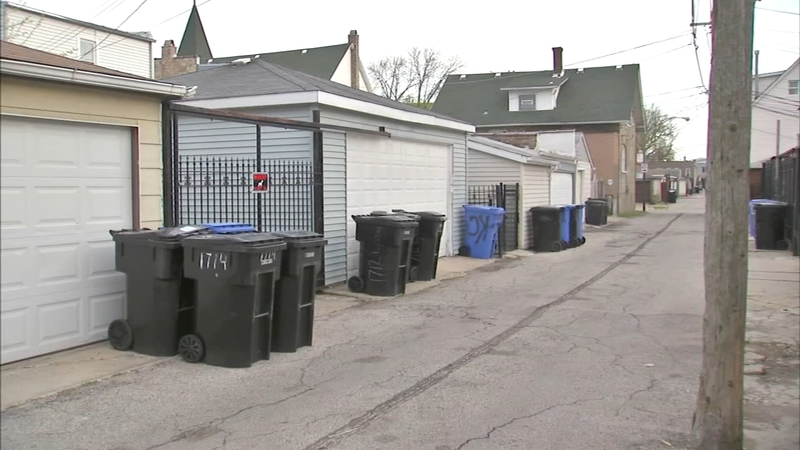 CHICAGO (WLS) -- The family of a missing 19-year-old Chicago woman believes a newborn baby found on top of a garbage can in a Humboldt Park alley Tuesday could be her baby.

Marlen Ochoa-Uriostegui was last seen on April 23 after leaving Latino Youth High School in Pilsen. She was nine months pregnant when she went missing and had a May 5 due date.

The family of a missing 19-year-old Chicago woman believes a newborn baby found on top of a garbage can in a Humboldt Park alley Tuesday could be her baby.

The newborn was just hours old when he was found Tuesday in an alley with his umbilical cord still attached in the 1700-block of North Keystone Avenue. A mom and daughter were walking by when they heard his screams and found him in a canvas shopping bag, fire officials said. They then rushed the baby to a nearby firehouse on Pulaski Road.

"Why? Why would she, why would somebody do something like this? It's a child," wondered Angelica Mendoza, Humboldt Park resident.

Two good Samaritans saved a newborn baby with its umbilical cord still attached who was left on a trash can in an alley Tuesday afternoon in Humboldt Park.

At the firehouse, paramedics saved the infant's life, performing CPR and reviving the boy.

"The baby was cold as concrete," said CFD Paramedic Field Chief Patrick Fitzmaurice. "I wasn't too optimistic, but like I said to the lieutenant, I wasn't ready to lose this one today, and neither were they and they worked very hard."

They used heating pads and warming blankets immediately, and took him to Norwegian American Hospital in an ambulance with a Chicago police escort, officials said. The newborn's condition was stabilized at Norwegian, and he was crying and kicking. He was transferred to Lurie Children's Hospital for further treatment.

"I think maybe they were angels because, you know, if the baby wasn't found maybe for half an hour, one hour later, probably he would die," said Jonathan Rodriguez, Humboldt Park resident.

Police have not yet released details on who left the child or why, but want everyone to know there were other options.

Meanwhile, Ochoa-Uriostegui's family are calling for a DNA test to be performed to identify whether or not she is the mother of the baby.

"If that baby is hers, it's a sign she's alive and is somewhere around here," her mother said Wednesday.

However, a DNA test could take days if not weeks.

Ochoa-Uriostegu is described as 5'3, with brown hair and brown eyes, and sometimes wears a small nose ring. She was last seen wearing a gray sweater, sweatpants and a maroon top with a Latino Youth High School logo on it.

Her husband and father of their 3-year-old son said he believes he was the last one to speak to Uriostegui the day she disappeared, stating he had been texting her throughout the day.
Illinois is a state with a Safe Haven Law, meaning anyone can hand over a baby 30 days old or younger that is unharmed to staff at a hospital, police station, or fire department, with no questions asked.

"But come to us, man. If she had called 911 we could have taken the baby to one hospital and her to another," said Fitzmaurice. "We don't judge. Take him to a firehouse. Leave the baby there. Give the kid a chance."

Dawn Geras is one of the authors of Illinois' Safe Haven law, and works with desperate mothers facing unwanted pregnancies. The pictures that line her office belong to Safe Haven children.

"It has to be a baby 30 days or younger," Geras said. "They can walk away. They don't have to answer any questions. There won't be police coming to look for them. The baby will be loved forever."