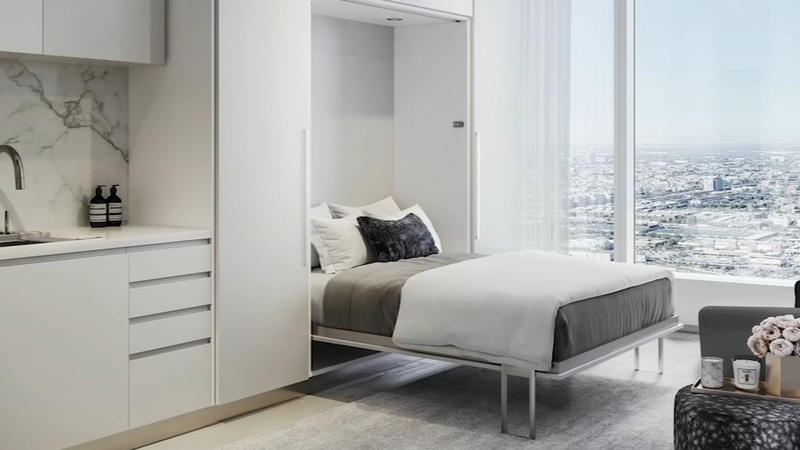 CHICAGO (WLS) -- When looking for affordable housing in Chicago, it turns out sometimes you have to think small. Devotees and developers say small homes create big opportunity for both young and old property seekers.

Pat Young has been downsizing for years.

"It is a gradual process because you do have things you care about, but you learn your things need to go onto a different life so you can have the luxury of freedom," she said.

Young has gone from a 6,000 square foot home in the suburbs to a 670 square foot condo in the city. She's preparing to go even smaller in a new condo building under construction in the South Loop, which will features some micro units. Her home in the skyscraper known as 1000M will be 350 square feet.

"As long as it has great closets and a great kitchen, you can really manage beautifully," said Young.

The building is under construction on South Michigan Avenue near Grant Park. Mike Golden, co-founder of @properties, the exclusive sales team for 1000M, said the smaller units will occupy several floors of the building.

"It came about because we saw a demand in our market place," Golden said. "We saw a demand for affordable efficient spaces that had high end luxury finishes that had access to incredible amenities."

Micro-units have been popular for some time in Europe, Asia and Canada, and they're growing in popularity in the U.S. They're usually about 350 square feet in size, sometimes smaller.

Golden said micro-unity buyers at 1000M range from young professionals to retirees. The condos start at $313,000, which is significantly lower than the $1 million plus selling price of some of the larger units in the building.

"This building is unique that we have the ultra-luxury apartments but we also have some more affordable efficient units that people can actually afford to get into when they are not wanting to spend a million, two or three million dollars," he said.

Young said 350 square feet is the right fit for her life style. But she doesn't think she'll go smaller.