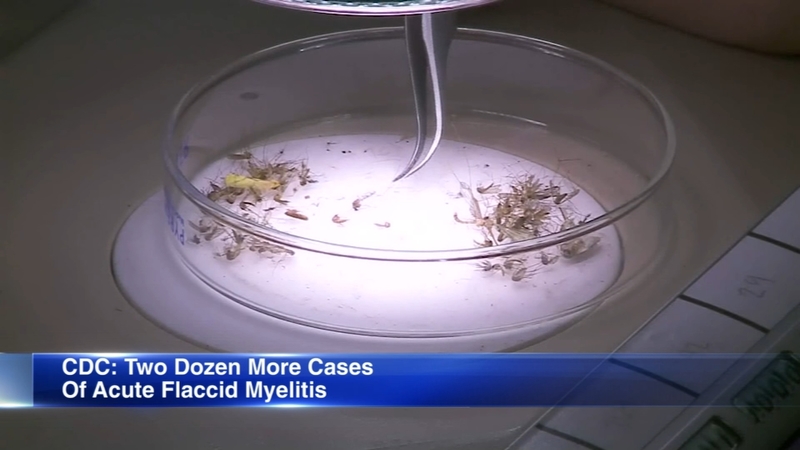 Parents of children who had a horrifying polio-like illness are accusing the Centers for Disease Control of hiding the deaths of two children who suffered from the condition.

The parents say by not publicly acknowledging the two deaths, the agency is intentionally downplaying the severity of acute flaccid myelitis (AFM), a disease that paralyzes healthy children in a matter of hours.

"I feel like they're just sugar-coating this," said Katie Bustamante, whose son Alex, age 6, died in May. "It eliminates my trust in the CDC."

Their accusations come amid a wave of criticism from parents of children with AFM and from some of the CDC's own medical advisers. In a recent on-camera interview with CNN, a group of parents gave the agency an "F" for its handling of the outbreak.

A CDC official said while she couldn't comment directly on the boys' cases, there may be a "lag" in AFM reporting from physicians to health departments to the CDC.

"I think we want to catch up with the backlog," said Dr. Anne Schuchat, principal deputy director of the CDC, a 30-year veteran of the CDC and a retired rear admiral in the US Public Health Service. "Even the past week we've expanded the number of disease detectives on the program."

Schuchat, who twice served as acting director of the agency and helped lead the fight against pandemic flu, SARS and anthrax, said she was sorry to hear that the parents think the CDC is hiding something.

"I certainly want to make sure the information that we have is shared as quickly as possible," Schuchat said. "We wish we understood all that we need to about this disease and how to best diagnose it, how to treat it and how to give families enough information about what to expect. I think it's very challenging when your child has been through something quite traumatic to not even know what the prognosis is."

She added that there's no simple lab test for AFM, so CDC disease detectives have to carefully review medical records.

ABC7 Eyewitness News spoke with a Batavia family whose 2-year-old was stricken by the disease in October. Several months later, doctors are pleased with her tremendous progress but say it will probably be years before it's clear how AFM permanently affects her.

On its AFM surveillance webpage, the CDC doesn't mention any deaths from AFM. At a press briefing last month, Dr. Nancy Messonnier, director of the CDC's National Center for Immunization and Respiratory Diseases, mentioned that the agency knew of one death in 2017, but did not mention any deaths this year, even when asked about it by a reporter.

Chris and Robin Roberts lost their 5-year old son, Carter, in September after a 2-year battle with AFM. CNN has seen portions of Carter's and Alex's medical records, which show their doctors had diagnosed them with AFM. In Carter's case, doctors at three medical centers -- Virginia Commonwealth University, Johns Hopkins and Boston Children's Hospital -- diagnosed him with the disease.

The CDC has set up a system where physicians report cases of AFM to their state health departments, which in turn report the cases to the CDC.

Two pediatric neurologists who serve as medical advisers to the CDC on AFM say they think the agency could be faster in reviewing and reporting cases and deaths.

"It shouldn't be taking this long to confirm these cases," said Dr. Keith Van Haren, assistant professor of neurology at the Stanford University School of Medicine and one of the CDC advisers. That kind of a turn around time for mortality reviews is a symptom of a disconnect at the CDC."

"They're doing a s*** job of measuring this, excuse my French," said his mother, Robin, a healthcare IT specialist.

On July 29, 2016, Carter vomited after dinner. The next day he had a fever of 99 degrees but was feeling well enough to eat and drink.

"It's just a virus," thought his parents, who have two older children. It was nothing alarming.

The next morning, Robin went into her son's room and found him on the floor.

"Mommy, mommy, help me," his mother remembers him saying.

Robin remembers trying to help Carter stand up. His head flopped back. He couldn't use his right arm. She scooped up her son and took him to the emergency room.

Within a few days, Carter couldn't move anything below his neck. He was put on a ventilator and never came off.

For the next two years, his family and nurses did everything for him. They fed him. They scratched his nose when he had an itch. All day and all night they turned him every 90 minutes so he wouldn't get bedsores.

Carter was undeterred by his illness. He could read books by the time he was four. He instructed his father on how to construct characters out of Legos and medieval swords out of aluminum foil.

Carter went to pre-school, and in August of this year started kindergarten. He came home from his first day beaming about circle time and a pretty little girl in his class who wore a rainbow dress.

A few weeks later, on September 22, he was having trouble breathing. Robin was home alone with him and called an ambulance. His last words to her were: "Mommy, I'm fine."

Today, Carter's ashes sit in an urn in his family's living room.

Both Carter's parents and Alex's parents say they're not sure if the CDC ever accepted their sons as official AFM cases back when they got sick in 2016.

Alex's mother says his doctor told her he reported his death to the California Department of Public Health, but she doesn't know what happened after that.

In Carter's case, his neurologist Dr. Sanjai Rao, told CNN he filled out paperwork on the CDC's website and following the CDC's instructions, sent the paperwork, lab specimens and MRI findings to the Virginia Department of Health.

An epidemiologist there confirmed Carter's information was sent along to the CDC, according to Rao, assistant professor of pediatric neurology at Children's Hospital of Richmond at Virginia Commonwealth University.

Doctors and parents say part of their frustration is that when they've asked the CDC about cases and deaths, they haven't received responses.

Rao says he reached out to a scientist on the CDC's AFM team, but never heard back.

"I would like answers," said Rao, an assistant professor of pediatric neurology at Children's Hospital of Richmond at Virginia Commonwealth University.

His voice chokes with emotion as he talks about Carter, whom he cared for for more than two years. "I want to know that the process benefits future cases of children with AFM," he said.

Other experts agree with Rao. "We want accurate numbers," said Dr. Kenneth Tyler, professor and chair of the department of neurology at the University of Colorado School of Medicine, and an adviser to the CDC on AFM.

An accurate count could help answer questions, he said. Where are the cases? How old are the patients? Are they male or female? "That helps us understand causation," he said.

"The CDC is in the place of trying to understand the long-term (consequences), and a death is really important," added Van Haren, the pediatric neurologist at Stanford and adviser to the CDC.

Schuchat said the CDC is working hard on AFM. "We are working 24-7 on this and really take this seriously," she said.

She said the agency has established a case definition for AFM, done laboratory testing on samples sent to them by state health departments, and worked with outside experts to publish information in medical journals.

A CDC spokeswoman said in the past two weeks, the agency has added 14 officers from the Epidemiologic Intelligence Services -- known as "disease detectives" -- to help review AFM reports filed by state health departments.

On June 10, 2017, about ten months after Carter got sick, Robin reached out to the CDC.

"I know it may seem menial, a request from a clinically educated mother, but you are doing these children and family a disservice to not further educate physicians or demand surveillance similar to that of Zika," she wrote to an email address she found on the CDC's website.

"Please do what is right by public health standards and gather more data," she continued. "Or, god forbid if you know more than what you say in a limited fashion online please share it with the public and these patients. My son was immunized on schedule we observed very good hygiene precautions and still became a vent dependent quadriplegic overnight."

"We are sorry to hear about your son," it said. "Your comments have been forwarded to the appropriate CDC program for their information. They will contact you directly if they have any questions."

She never heard from the CDC again.

"I'm so sorry to hear that. That's very concerning," Schuchat told CNN. "We are trying to better connect with families, and it's so important that we listen to them."

Several other parents told CNN their emails to the CDC have also gone unanswered. Some of those emails offered help to the CDC from the families' Facebook group, which has gathered medical information on hundreds of AFM patients.

Last week another enterprising parent got a response from the federal agency. Four-year-old Joey Wilcox of Herndon, Virginia, was diagnosed with AFM in September. His father, Jeremy, works with government agencies as part of his job at a high-tech consulting firm. Wilcox knows how to seek out -- and find -- officials.

He aimed high. Online he found Schuchat's email address, and asked her to meet with him and other parents. He says she responded within 15 minutes.

He thinks one of the reasons for the quick response is the "F" that parents gave the CDC.

That was a pivotal moment," he said of the CNN story.

More than a dozen families are scheduled to meet with Schuchat Tuesday in Washington.

Carter Roberts' and Alex Bustamante's parents will be among them.