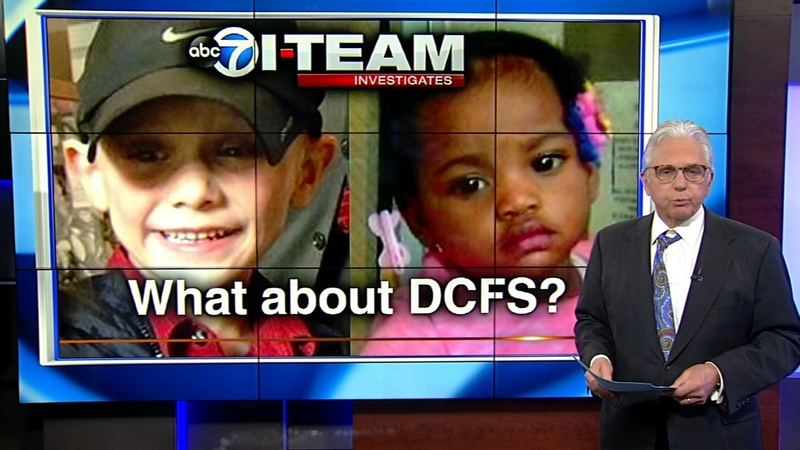 CHICAGO (WLS) -- Two tragedies, two years in between, at locations two counties apart. The pair of cases leads to one question: what about DCFS?

The Illinois Department of Children and Family Services is charged with protecting vulnerable youngsters in the state.

Our ABC7 I-Team has examined two similar cases: five-year-old AJ Freund, whose body was found Wednesday in a shallow Woodstock grave and 17-month old Semaj Crosby who went missing two years ago Thursday. Before children both were found dead, their families had frequent visits from DCFS involving allegations of abuse.

"Semaj Crosby, she went missing after DCFS was at her mother's residence for a check to make sure that she was complying with DCFS rules and regulations," said Dan Jungles, Will County Sheriff Deputy Chief of Investigations.

Will County Deputy Chief Dan Jungles explains the timeline of what happened in the Semaj Crosby investigation.

Documents from DCFS detail 11 different child protection investigations involving Semaj's family between 2015 and 2017, when the toddler was murdered.

Three investigations were initiated for reported safety issues with Semaj's brother. Additional investigations a result of allegations of child neglect and abuse in the home.

DCFS was criticized after Semaj's death for not doing more to protect her. The attorney for Sheri Gordon-Semaj's mother-says DCFS is not to blame.

"This family was receiving services. If somebody thought that something going on in that house was a danger, those kids would've been taken out immediately," said attorney Neil Patel. "But it wasn't just DCFS in there. The house had prior police contact. And at that point I don't buy the explanation that DCFS dropped the ball. There's too many people in that scenario that would've dropped the ball."

Acting Cook County Public Guardian Charles Golbert told the I-Team children have suffered because of the lack of leadership at DCFS during the past decade.

"Marc Smith, who was just appointed the new DCFS director, he is the 13th director in the last 10 years" said Golbert.

According to DCFS records, the agency's involvement with AJ Freund began when he was born with opiates in his system. A detailed timeline just released by DCFS shows many of the investigations of alleged neglect and abuse were determined to be unfounded, including one instance where AJ was removed from his parents by law enforcement but then returned to the home when bruising on the boy was attributed to the family dog.

Child advocates pushed for changes at DCFS after Semaj's death, a case that has never resulted in arrests, although police say the investigation is still open. Now child advocates contend AJ's murder is a reminder more reform is needed.