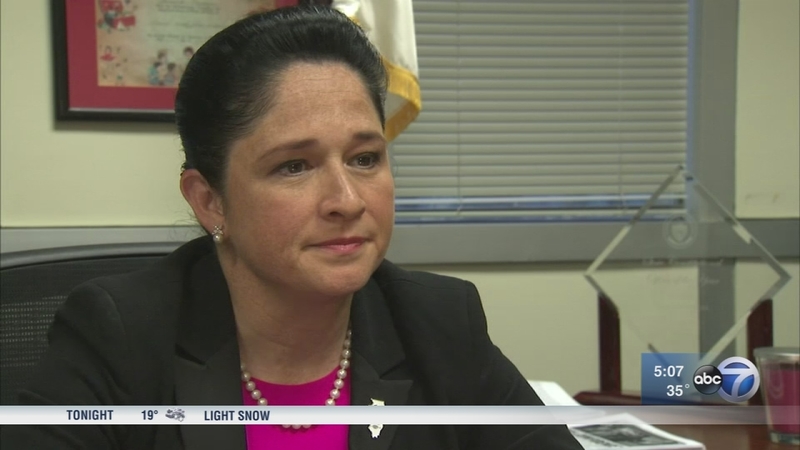 CHICAGO (WLS) -- The voters in Alabama have spoken, rejecting Republican Roy More in favor or Democrat Doug Jones in what some see as a repudiation of President Donald Trump in the process. Reaction is pouring in.

Moore had been accused of sexual misconduct when he was in in 30s, including an alleged incident with a girl who was just 14 at the time. He denied the charges.

Trump campaigned for Moore and made a robocall on his behalf, urging Alabama voters not to support Jones.

Many people weighed in on the results of Tuesday's election. But a tweet by Illinois Comptroller Susana Mendoza, a Democrat, garnered a lot of attention.

"I don't typically engage on Twitter with the president. There's just - you'd never end, right? But I felt like this moment in history was such an important moment that I wasn't going to be anything but just honest about my feeling," Mendoza told ABC7.

Mendoza said she had no regrets for her strong language, clarifying that when she used the word "perv" she was referring to both the president and Moore.

"I did feel like, you know, it's not OK to just sit on the sidelines. Even though yes, I may be in charge of paying the state bills, I'm still, I think in large part, a vessel for my own voice. But also a vessel for lots of other peoples voices who don't normally get the attention when they speak," Mendoza said. "So I think I spoke yesterday for quite a few people that were probably feeling the same way that I was."

When asked if she thought her tweet might be considered over the top by some people, Mendoza responded with, "No, I think I was spot on. I mean, it's really the only language that Donald Trump can maybe even understand."

Moore, meanwhile, refused to concede and raised the possibility of a recount during a brief appearance at a somber campaign party in Montgomery Tuesday night.

"It's not over," Moore said. "We know that God is still in control."

From the White House, Trump tweeted his congratulations to Jones "on a hard-fought victory," but added pointedly that "the Republicans will have another shot at this seat in a very short period of time. It never ends!"

Congratulations to Doug Jones on a hard fought victory. The write-in votes played a very big factor, but a win is a win. The people of Alabama are great, and the Republicans will have another shot at this seat in a very short period of time. It never ends!

The president also tried to distance himself from Moore, tweeting, "The reason I originally endorsed Luther Strange.... is that I said Roy Moore will not be able to win the General Election. I was right! Roy worked hard but the deck was stacked against him!"

The reason I originally endorsed Luther Strange (and his numbers went up mightily), is that I said Roy Moore will not be able to win the General Election. I was right! Roy worked hard but the deck was stacked against him!

Former presidential strategist Steven Brannon, who had tried to drum up support for Moore, was called out by Republican U.S. Representative Adam Kinzinger. The congressman tweeted, "Brannon is a RINO. His morally inept strategies are unwelcome here. #YoureFired"

Bannon is a RINO. His morally inept strategies are unwelcome here. #YoureFired

RINO is an acronym that stands for "Republican in name only."