Lopez says he believes it is retaliation for his attempt to go after landlords who rent to known gang members
WLS
By Jessica D'Onofrio, Karen Jordan and ABC 7 Chicago Digital Team 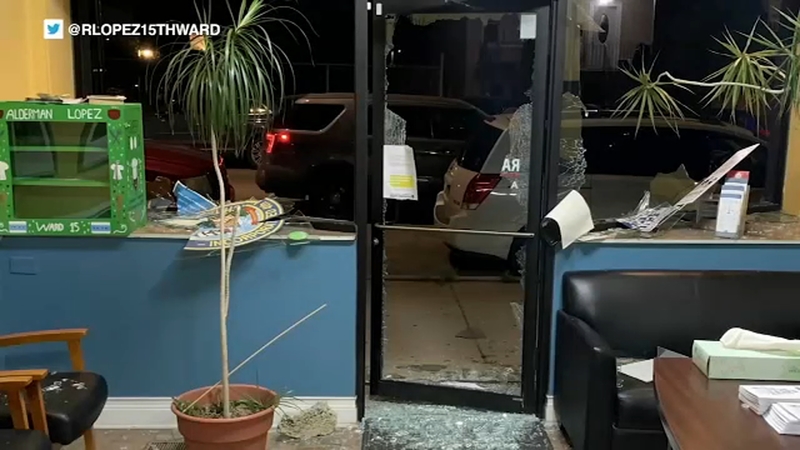 Vandals target Ald. Ray Lopez for 2nd time in less than a week

CHICAGO (WLS) -- Chicago police are looking for two people who threw bricks through the window of 15th ward Alderman Ray Lopez's office Sunday in Brighton Park on the Southwest Side.

According to police, the suspects were seen around 11:45 p.m.throwing bricks at the office in the 2700-block of W. 47th Street.

The suspects ran away and no one is in custody, police said.

"Windows will be replaced, but I will not let the fear and intimidation tactics stop me," Lopez said. "I have no doubt this is a continuation of gangs still trying to send a message to intimidate me to keep me from pursuing them in their illegal activities in our neighborhood."

Less than weeks ago, someone threw a brick into Lopez's home in Brighton Park and set fire to a neighbor's garage. The incident was partly caught on his home security camera.

Alderman Raymond Lopez speaks after he said his home was vandalized and a neighbor's garage set on fire Thursday morning.

Lopez said he believes the vandalism and arson was in retaliation for his attempt that week to go after landlords who rent to known gang members.

"I'm not giving up because if I give up, the Southwest Side will give up and say what's the point; if he can't stand up for himself, why should I do it either," Lopez said.

Early Monday morning, Lopez sent out a tweet accusing Mayor Lori Lightfoot of not protecting communities and elected officials from what he calls terror attacks on our community.

"When you Mayor, refuse to call out the terror attacks on our communities, especially on their elected, criminals only feel more emboldened to continue their reign," Lopez wrote. "Glass can be replaced, peace of mind and security cannot. Your silence is destroying this city!"

When you Mayor, refuse to call out the terror attacks on our communities, especially on their electeds, criminals only feel more emboldened to continue their reign. Glass can be replaced, peace of mind and security cannot. Your silence is destroying this city! pic.twitter.com/n0lBBgnb9o

Mayor Lightfoot responded to Lopez's comments at a press conference Monday saying she has acknowledged the attacks and is making sure the police are addressing the alderman's security needs.

"Any attack on any elected official simply can't be tolerated in our city," Mayor Lightfoot said. "When there was an incident a few weeks back at his home, we made sure that the local district commander and our deputy chief were in contact with alderman Lopez to make sure that his security needs are addressed."

But Lopez, one of the mayor's harshest critics, says he has not heard from her.

"For the mayor to say that she's been doing everything to keep me and my family safe, and reaching out and putting all the resources to bear to protect us and protect the office, that's just a lie," he said.