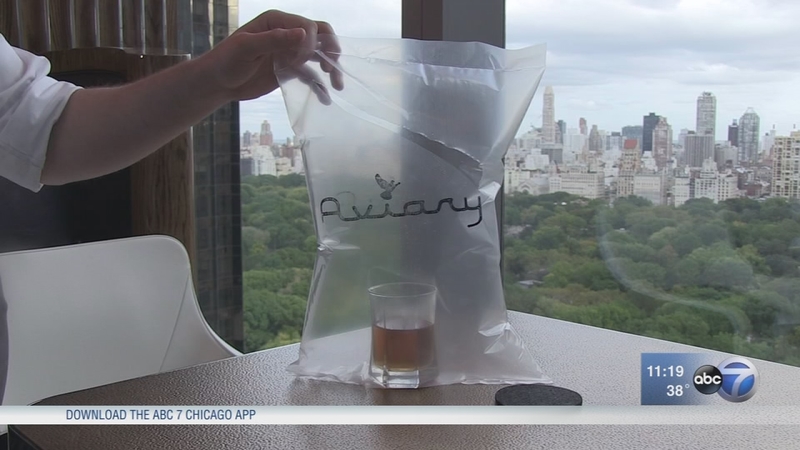 NEW YORK CITY (WLS) -- The team behind restaurants such as Alinea, Next and the Aviary has launched its first project outside of Chicago, in New York City.

They've taken over the lobby of a mid-town hotel, and have transplanted their cutting edge cocktails, as well as their friendly Midwestern service.

The Aviary is really a restaurant for drinks. And the Alinea Group's high standards have recently been exported from Fulton Market to the 35th floor of the Mandarin Oriental Hotel lobby, overlooking Central Park. The job of creating and presenting these modern approaches to cocktails falls on the shoulders of beverage director Micah Melton, who moved to New York temporarily.

"We definitely have a collection of the throwback dishes and drinks on the menu, but we wanted to take some of those as well and update them for New York," said Melton.

By using a familiar coffee siphon, Melton recreates a Penicillin, a classic New York drink, with a bit of flourish.

"Two types of Scotch in the bottom, with honey and ginger liqueur; then we're boiling it up, adding some blueberry flavor, some tea flavor, and then bringing it back down. At the end of the day you have a blueberry-forward version of a penicillin," he said.

One of their new creations is the "Wake & Bake" using a technique borrowed from Alinea.

"We looked at the pillow literally, as if you woke up in the morning in New York, what would you want. The natural thing there is coffee, bagels and orange juice," said Melton.

So he makes a classic Manhattan, seals it in a bag and pumps in bagel aroma, cutting open the bag at the table, so the guest experiences aroma as well as flavor. Behind the Aviary, there's the Office, a hidden speakeasy, featuring classic cocktails, and quite a bit larger than the original in Chicago. There's also food here, thanks to Chef Dan Perretta, another Chicago transplant.

Kampachi ceviche is cured in lime leaves, topped with thinly-sliced hearts of palm and a cucumber broth infused with Thai and Peruvian chiles, as well as miniscule finger limes. A version of takoyaki - octopus embedded croquettes - are one-bite affairs.

"We serve with sweet onion aioli, pickled ginger, bonito and scallion," he said.

It's a long way from the West Loop, but the new view ain't bad.

"It's nice to come into work every day and have this view looking over Central Park, that's for sure," said Perretta.

So even if you haven't been to the Aviary or the Office in Chicago, if you happen to be in New York City here near Columbus Circle and you want to check out what they're all about, they're open all day long since they're in a hotel, and you're going to find some things familiar to Chicagoans, but also new for New Yorkers.

EXTRA COURSE: SEARCH FOR NEW YORK-STYLE PIZZA AT THE BASE OF THE BROOKLYN BRIDGE

In this week's Extra Course, ABC7 food reporter Steve Dolinsky searches for traditional New York-style pizza at the base of the Brooklyn Bridge.