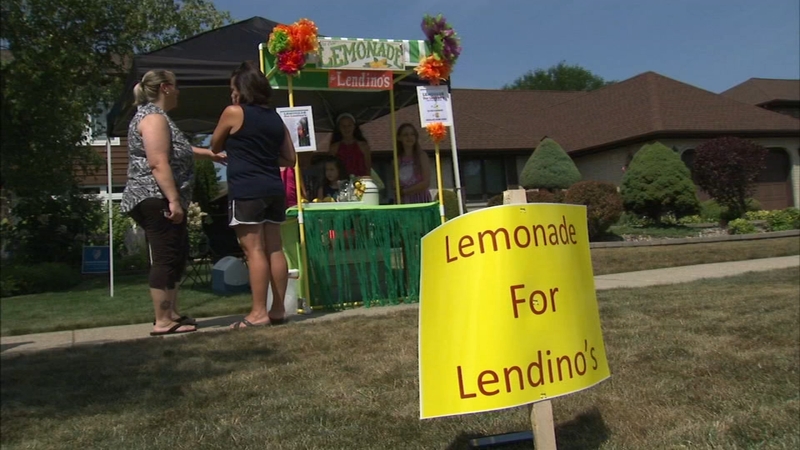 MOUNT PROSPECT, Ill. (WLS) -- People in northwest suburban Wheeling are coming to together to show love for the Lendino family, after they lost a teenage daughter in a crash.

It started off as a small idea to help raise money for some friends. It turned into 13 lemonade stands and the money going to a family that needs it now more than ever.

With every pour, and every cupful, a family in need gets more love and support. And it's been spilling in from all over the community.

"We survived an accident many years ago and I know how the family feels, so I just think everybody should come out, even if you donate a couple of dollars," said neighbor Patricia Watral.

On July 21, the Lendino family was driving in the middle of the afternoon in their car on Milwaukee Avenue in Wheeling, not far from their home.

Police said a car driven by 30-year-old Adam Grunin rear-ended the Lendino's. The impact was so hard, it forced them into the intersection, where they were hit by a Toyota truck.

Authorities say Grunin was going 107 miles-per-hour at the time of the crash, fleeing from another accident scene just before the second crash.

In the Lendino's car was the family of four. Sixteen-year-old Alyssa didn't survive. Her funeral has been postponed while her 12-year-old sister, Amanda, remains in the hospital after five surgeries.

Her father and mother are by her side. Both parents sustained injuries as well.

Still in shock, their dear friends needed to do something. So they did.

"I said I'm gonna do a lemonade stand and I had a million ideas and my daughter contributed her thoughts, my husband contributed his thoughts, and between the three of us, we came up with the idea of putting lemonade all over town," said Julie Bohannon, a friend of the family.

The response has been tremendous. Other friends, neighbors, even businesses are helping out, with proceeds going right to the Lendino family.

"It's so emotional," Bohannon said. "It's made me feel so good that we're accomplishing something, a little something."