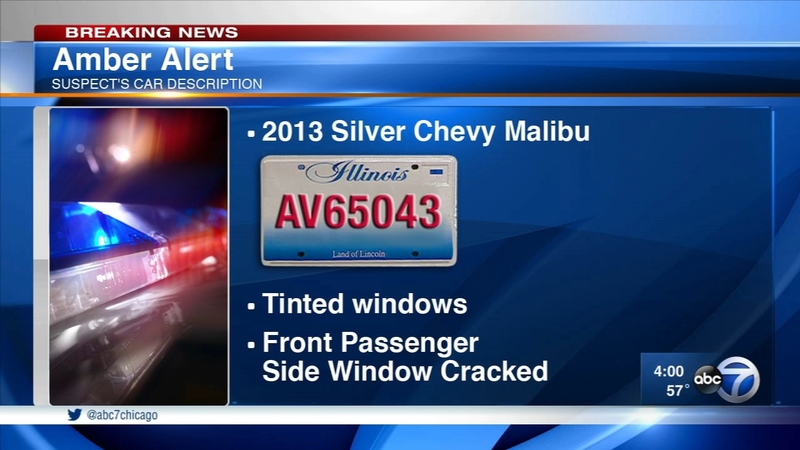 DOWNERS GROVE, Ill. (WLS) -- An Amber Alert issued by Illinois State Police on Thursday has been canceled after the 7-month-old subject of the alert was found.

The alert was issued at about 1:45 p.m. when police said 7-month-old Kylee Jones was abducted during a traffic stop near the Belvidere Oasis. The infant was later found safe at Pete's Fresh Market at the intersection of Madison Street and Western Avenue on the city's West Side, according to authorities.

Police are still searching for the vehicle involved in this incident, a silver 2013 Chevy Malibu, and the man who allegedly abducted the child in the car. The license plate is AV65043. The car's windows were tinted and there was a crack on the front passenger-side window.
Jones was abducted by a man who goes by the nickname "Boopa," police said. Illinois State Police stopped the car on the westbound Kennedy Expressway, near the Belvidere Oasis. Inside the vehicle were a female driver, "Boopa," the male passenger and the infant Jones, police said. The woman who was driving got out of the car, at which point "Boopa" jumped into the driver's seat and took off.

The woman told police that she had picked up "Boopa" in the morning and that they were driving to Madison, Wisconsin. "Boopa" does not have any rights to the child, police said.