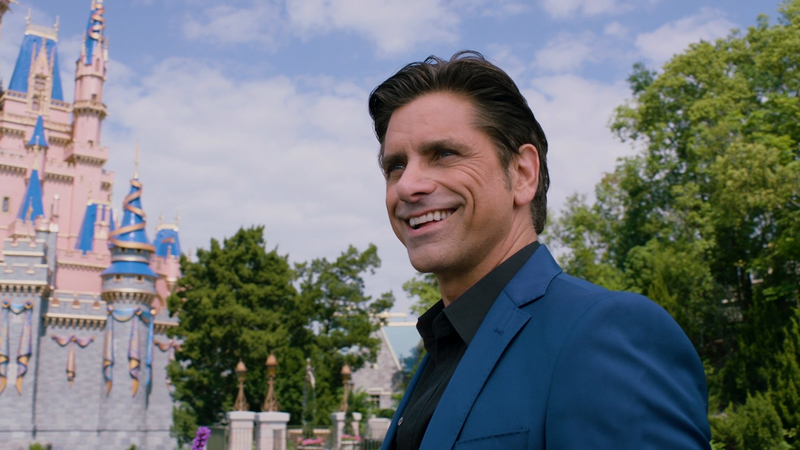 NEW YORK -- The Top 9 and one contestant from last season headed to Disney World for the best night of the year!

Disney Night opened with a magical performance from Sofia Carson of Disney Channel and Freeform fame as she sang 'A Whole New World." She was joined on the stage by this year's hopefuls.

The whole night was Disney-themed. Even Katy Perry came dressed as Tinkerbell!

TINK fast - halfway through the Top 10 of #AmericanIdol. Tune in to @ABCNetwork if you believe in fairies as much as I believe in this group #clapclap ✨ pic.twitter.com/TNmYZCRTLv

The contestants were joined on their journey by one finalist from last year. After a nationwide vote, Arthur Gunn earned that spot following his performance on the Comeback Show.

John Stamos lent his musical talents to the Idol hopefuls as a guest mentor. Stamos, a musician and actor, is not only a big Disney fan, he has a new original series on Disney+ called 'Big Shot.'

The 16-year-old singer took John Stamos' advice to engage the audience and the judges to heart for his performance of 'Real Gone' from Cars.

"Caleb, this is really Peter Panning out for you," Katy Perry said.

"You have to radiate off the stage and that was a radiant performance," Lionel Richie said.

Stamos urged Willie to capture some of that emotion for his performance of 'Circle of Life' from The Lion King.

"I'm sitting here like, 'Why am I crying on The Ling King," Lionel Richie said after the performance.

Deshawn Goncalves picked 'When You Wish Upon A Star' for his song. He tried a jazzy take on the classic from Pinocchio.

"I was grinning so big watching you," Luke Bryan said. "You are not the same person who auditioned, and I am so proud of that."

High school student Casey Bishop took on a change of tone with the ballad 'When She Loved Me' from Toy Story for her Disney song.

"Casey, your vocals will take you to infinity and beyond," Katy Perry said.

"You are a superstar in making," Luke Bryan added. "I don't know if I had chill bumps like that in four years of doing the show."

Chayce Beckham had never been to Disney World, and he's a huge Star Wars fan, so first stop... Galaxy's Edge.

He chose 'Baby Mine' from Dumbo and used a little advice from John Stamos to make the song his own.

Another lifelong Disney fan who had never been to the Magic Kingdom is Alyssa Wray.

She performed 'A Dream Is A Wish Your Makes' from Cinderella.

The Comeback kid, Arthur Gunn, made sure he would not be forgotten with his rendition of 'Remember Me' from Coco.

"That was one of your best performances that I have ever seen," Katy Perry said.

In between the contestants, Disney fans got a treat from Jon Batiste with a performance of "It's All Right" from the Oscar-winning film Soul.

Cassandra Coleman is another Star Wars fan who has been living up at Disney World but could she 'Go The Distance' with her performance of the song from Hercules?

The Tennessee singer impressed the judges.

Hunter Metts thought he would be going home after messing up the end of his performance during Idol's Oscar Night.

He sang his mom's favorite song 'You'll Be In My Heart' from Tarzan.

Grace Kinstler closed out the show with 'Into The Unknown' from Frozen II.

She said she chose that song because it reflects how she feels right now.

Grace drew a standing ovation from the judges.

"You walked to the mic with a look in your eye like you were going to slay this, and there was never any doubt," Luke Bryan said. "You went way beyond that."

America voted in real-time on who would advance to the next round and here are the top 7:
Chayce Beckham
Casey Bishop
Willie Spence
Hunter Metts
Caleb Kennedy
Grace Kinstler
Arthur Gunn

Music by Coldplay will be the focus of the Mother's Day episode of American Idol next Sunday. Chris Martin will serve as a guest mentor. The episode on May 9 will also feature Coldplay's debut performance of their new single "Higher Power."

America will vote for the Top 5 during the show and we'll find out who moves on together at the end.