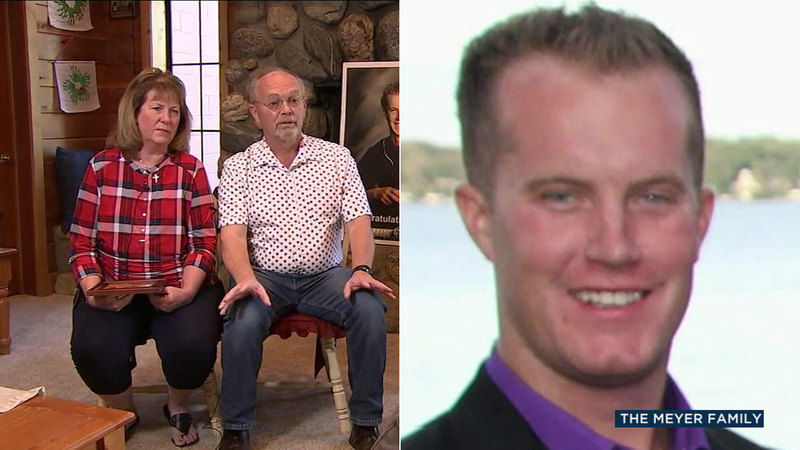 CLAREMONT, Calif. -- Taylor Meyer left for Playa Del Carmen, Mexico to celebrate a friend's 30th birthday. He was part of large group of singles and couples who rented a condo in a gated community in the popular resort town.

On Friday, the 27-year-old's parents received a call from the U.S. consulate in Mexico telling them their son had been murdered.

"We first didn't believe it," Kris Meyer, the victim's father, said. "This is just news that we thought was a very cruel hoax, but then we confirmed it was real."

Kris and Krista Meyer were told their son was stabbed to death.

"Three people attacked him, and that's what the witnesses said," Krista Meyer said.

The family said their son's wallet, shoes, watch and iPhone were taken during the attack.

But the Claremont couple said they don't understand how their son ended up so far from the condo he rented with friends.

"The bar is here," Kris Meyer said, demonstrating with his hands. "There was a 10 minute walk to the gate, the AirBnB they rented in a gated community. His body was found 32 minutes walking the other direction and a 10 minute cab ride away from the bar."

Friends who traveled with Meyer told his parents the group became separated and they lost track of Meyer.

Authorities have not said how Meyer ended up near the park where he was killed. His parents believe they may be trying to cover up their son's murder so not to scare away tourists from the area.

"We would just like the FBI overseeing and getting permission from the Mexican government to oversee this investigation," his father said. "And so that we have clarity that we know that this is what really happened."

On Sunday, more than 100 of Meyer's family and friends gathered at the Hermosa Beach pier to hold a candle light vigil.

"They brought him back to life for us," Krista Meyer said of the vigil for her son.

On Saturday, Meyer's family is planning to hold his funeral at Purpose Church Pomona to a packed crowd. His parents said they want it to be a celebration of their son's life.