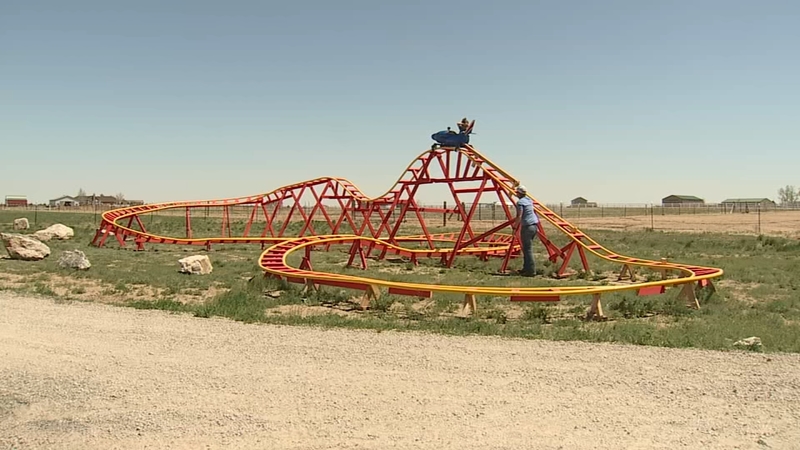 BRIGHTON, Colo. -- If you're handy and have a little one, we have an idea for your next DIY project.

A family in Colorado is turning a playset into an amusement park, KMGH reported.

For a 3-year-old, having a swing set is pretty cool, but how about your own roller coaster?

"It's a redneck roller coaster," said Scott Brazelton, the father. "That's the way I describe it."

At their home in Brighton, the Brazeltons have an amusement park ride in their backyard. It looks pretty expensive, but Scott actually made it and found some ways to cut costs.

"This is the body... make from some planters... this is from a brewing barrel," Scott said.

Scott has been flying planes in the Navy for 17 years, and is currently a pilot for Southwest. That explains the colors, which is what West actually chose instead of a rocket design. He likes his dad. And to get the engineering right, Scott asked a friend and former aerospace engineer for Boeing, who had also built one, for help. There's obviously a lot of math involved.

"So just kind of some Excel spreadsheets and some nerdy design stuff, calculating bank angles and how fast it's gonna go and how high you need the hill to be to make the car go around the whole track," Scott said.

It's only calculated for toddlers, and specifically, for his two sons, whom he wanted to make up for lost time with, by assembling this coaster. That can happen when you're sent all over the world.

"No matter what you're gone for how long you're gone, at least in the military, it always comes with some feelings of, you know, a little bit of guilt. But also, hey, I want to make it up to him when I get back," Scott said.

Now, Scott is a reservist, so he's home a lot more, giving him plenty of time to push his son down this ride, over and over and over again. West can hardly contain his excitement.