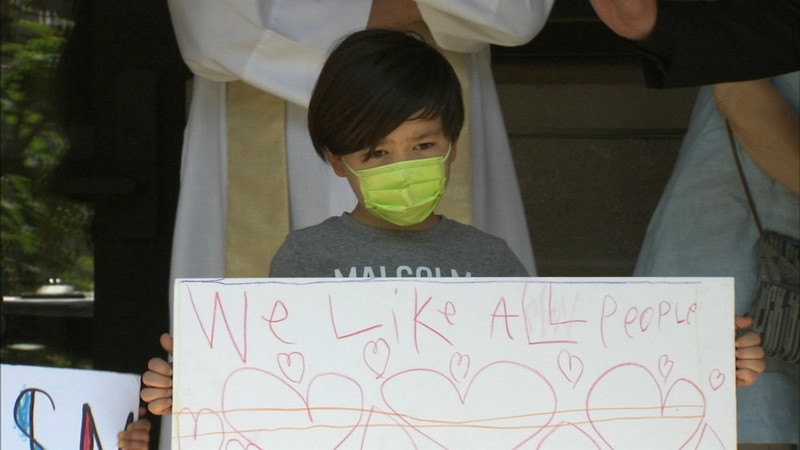 CHICAGO (WLS) -- They honor some of the victims of hate: Religious leaders from different faiths joined with the community Sunday to protest anti-Asian hate.

Everyone paused for eight minutes of silence to honor the victims of the recent mass shooting in the Atlanta area. Six of the victims were Asian women.

"All of you in your neighborhoods and your churches can try to change those voices that try to make Asian Americans a target," said the Rev. Patti Nakai of the Buddhist Temple of Chicago.

The Rally To Stop Anti-Asian Hate was held in the parking lot of the Buddhist Temple of Chicago, located in the city's Uptown neighborhood.

This far North Side community is a part of state Sen. Mike Simmons' 7th District, and is where he said one of his constituents, who is a member of the Asian American Pacific Islander community, was attacked last month.

"This rise of white nationalism and white supremacy is percolating through our neighborhood, the same neighborhoods my family helped integrate decades ago," Simmons said.

Advocates believe part of the reason behind the increase is a direct result of pandemic-related discrimination.

Dozens who attended stood in solidarity with the message, including 15-year-old Sydney Kramer, who came to this country after being adopted as a baby.

"I've been bullied because of how I look, my ethnicity," Kramer said.

The teen and her mother traveled from Wisconsin for Sunday's rally in their effort not to let hate win.

"I tried to raise Sydney with an open mind to people of all colors, and then to receive hate crimes against her community in our country makes me angry," Heidi Welch-Kramer said.