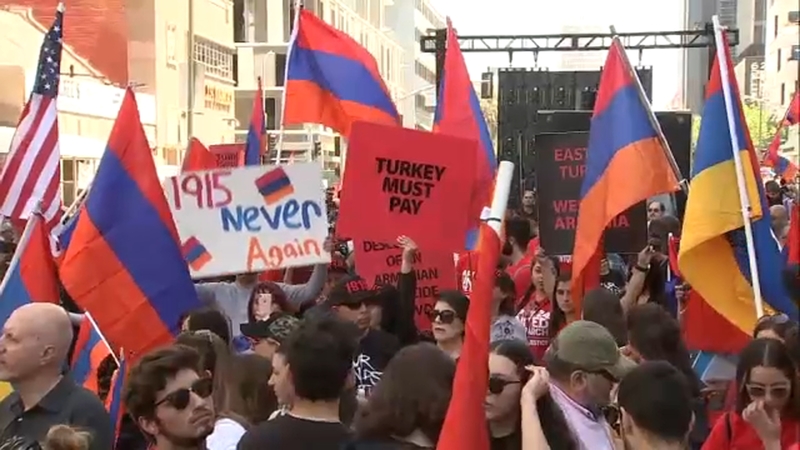 Mass killings of more than a million Armenians by Ottoman Turks a century ago were genocide, the Senate declared Thursday in a vote that prompted angry denunciations by Turkey and accusations that the U.S. was undermining its relations with a key NATO ally.

The Senate action follows a vote by a Senate committee to impose sanctions on Turkey after its offensive in Syria and purchase of a Russian S-400 missile system.

The actions were the latest by Congress to push President Donald Trump to take a harder line against Turkish President Recep Tayyip Erdogan. Trump said last month that Erdogan was "doing a fantastic job for the people of Turkey.''

The Armenian resolution and the sanction bill passed by the Senate Foreign Relations Committee "endanger the future of our bilateral relations," said Fahrettin Altun, a spokesman for Erdogan.

The Turkish Foreign Ministry said in a statement that the Senate vote "is a shameful example of the politicization of history. However, those who use history for political purposes will never achieve their goals.''

The Armenian resolution had been blocked three times at the request of the White House, but won unanimous approval Thursday on its fourth try.

Co-sponsored by Democratic Sen. Bob Menendez of New Jersey and Republican Sen. Ted Cruz of Texas, the nonbinding resolution affirms that the genocide occurred and that Turkey is responsible.

"I say to my friends and colleagues that genocide is genocide,'' Menendez said on the Senate floor. "Senators in this body should have the simple courage to say it plainly, say it clearly and say it without reservation.''

Menendez and Cruz tried three times to bring up the resolution using a procedural maneuver that would allow approval on a voice vote, a way to avoid lengthy floor debate. Each time, a Republican senator objected, citing White House disapproval.

Republican Sen. Kevin Cramer of North Dakota, who objected to the measure last week, said he agreed to do so at the White House's request because the vote would have occurred around the time of a NATO summit where Trump, Erdogan and other leaders gathered in London.

The House passed an identical resolution overwhelmingly in October in what was widely seen as a rebuke to Turkey after its invasion of northern Syria. Turkey has lobbied for years against U.S. recognition of the killings of Ottoman Armenians as genocide. Erdogan said during a White House visit last month that the House vote had "hurt deeply the Turkish nation" and had "a potential of casting a deep shadow over our bilateral relations.''

Activist groups cheered the Senate vote as long overdue. "The president ran out of people he could turn to to enforce Erdogan's veto,'' said Aram Hamparian, executive director of the Armenian National Committee of America.

Turkey's decadeslong opposition to the resolution was "the longest-lasting veto over U.S. foreign policy" by a foreign power in American history, Hamparian said.

Historians estimate that up to 1.5 million Armenians were killed around World War I, and many scholars see it as the 20th century's first genocide. Turkey disputes the description, saying the toll has been inflated and those killed were victims of a civil war.

Instead of a resolution affirming the genocide, Turkey has called for a joint committee of historians to investigate the slayings.

Senate supporters got a big boost Thursday when reality TV star Kim Kardashian West took to social media to urge approval. "Please call your Senators NOW and urge them to vote YES on the #ArmenianGenocide resolution,'' she told her 153 million followers on Instagram. "Denial is the final stage of genocide,'' she added.

Kardashian West, who is of Armenian descent, also tweeted in support of the resolution.

Cruz called the vote a "moral duty,'' noting that a century ago, "the world remained silent" about the genocide, which even now is not widely known. The United States has an obligation to acknowledge the murder of "1.5 million innocent souls,'' Cruz said. "This is a moment of truth that was far too long coming.''

Senate Foreign Relations Chairman Jim Risch, R-Idaho, said the sanctions bill is intended to force Erdogan to "walk away from the S-400" missiles.

"As long as the S-400s are in Turkey under Turkish control, there will be no F-35s delivered to Turkey,'' Risch said, referring to a U.S.-led fighter jet program. "This is Erdogan's choice, and he is well aware of the consequences.''