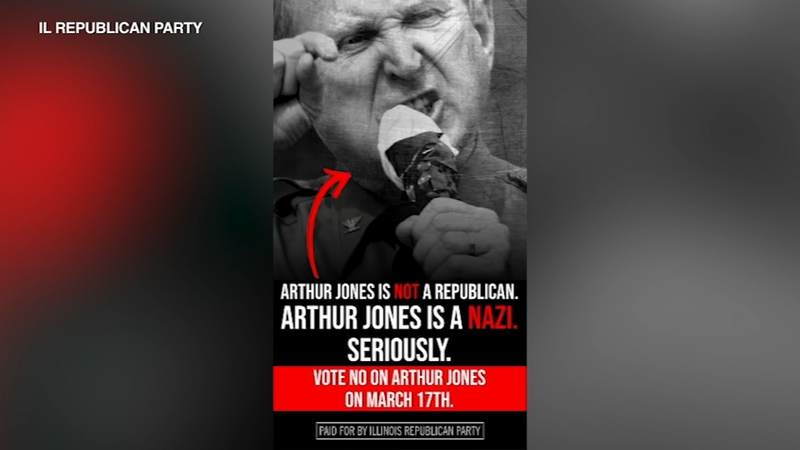 CHICAGO (WLS) -- Illinois Republican leaders are coming out against a controversial candidate in that party's primary race for the 3rd congressional district.

GOP leaders are endorsing Mike Fricilone and are launching a campaign against his challenger, Neo-Nazi Art Jones.

Illinois' 3rd District covers parts of Cook County. Both Republicans are trying to unseat Democrat Dan Lipinski, who has represented that district since 2005.

Thursday's message from Illinois Republicans: don't vote for the neo-Nazi on your primary ballot.

"Arthur Jones is a neo-Nazi, an anti-Semite, and Holocaust denier. He is not a Republican. He has no place in a civil society," said Illinois GOP Chairman Tim Schneider.

Jones did, however, secure enough signatures to legally appear on the Republican ticket for the 3rd congressional district on March 17th.

That's why the Illinois GOP is doing the unprecedented. They are endorsing Mike Fricilone, a furniture salesman and Will County Board member, in an open GOP primary.

"It hurts the ticket up and down when you have somebody like that on there because people start to wonder, what's this party about?" Fricilone said, referring to his neo-Nazi challenger. "So I said I'm going to stand up and run."

The endorsement is a dire move for Illinois Republicans trying to distance themselves from a Holocaust denier running on their ticket, again.

"Two years ago he was able to slip through and get the nomination even though the Republicans tried to fight that," said ABC 7 Political Analyst Laura Washington. "I've never seen anything like this before, where there's been a coordinated effort to keep a candidate from moving forward on the ballot."

The GOP endorsement comes with a slew of online ads, mailers and robo-calls to educate the public.

"I can't help if they're idiots," Jones said in response.

"He's just not what we want in America, and so if I have to be the guy to take him on, so be it," Fricilone said adding that he does not feel like a sacrificial lamb here and believes he has a shot of winning the primary and the general.