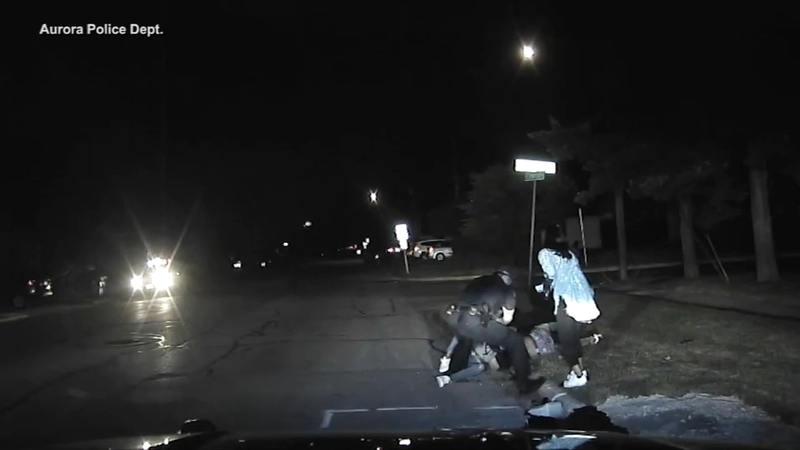 The video shows more officers eventually moving in, but not before the Kane County State's Attorney said one of those women, Sheba Taylor, 26, of Chicago, began to strangle the pinned officer "to the point where he was unable to breathe."

Taylor, as well as Jennifer Taylor, 24, of Chicago and Paul Sherrod Taylor of DeKalb, are all indicted by a grand jury facing multiple felony charges, including attempted first-degree murder.

"Someone who is being strangled can lose their consciousness in a moment of seconds," Kane County State's Attorney Jamie Mosser said. "And that means they're literally on the precipice of death at that point."

Aurora police said it started with a traffic stop for rolling through a stop sign. Dash camera video shows the officer approach the driver. Then, police say a passenger gets out off-camera.

After shouting back and forth the officer attempts to arrest the woman and then the driver, who police say fled. Police said the two women passengers chased the officer and began attacking him. The driver was also part of the assault.

"A minor infraction, that likely would have resulted in a citation at most, turned into an officer fighting for his life," Aurora Police Chief Kristen Ziman said. "We are sending a collaborative message that these violent offenders, and their acts of emboldened defiance, will be met with harsh consequences."

The dashcam video was edited together by authorities. In that video, there is not any strangulation that is clearly visible. However, authorities said that the officer's testimony and photographic evidence of his injuries will demonstrate that the alleged strangulation took place.