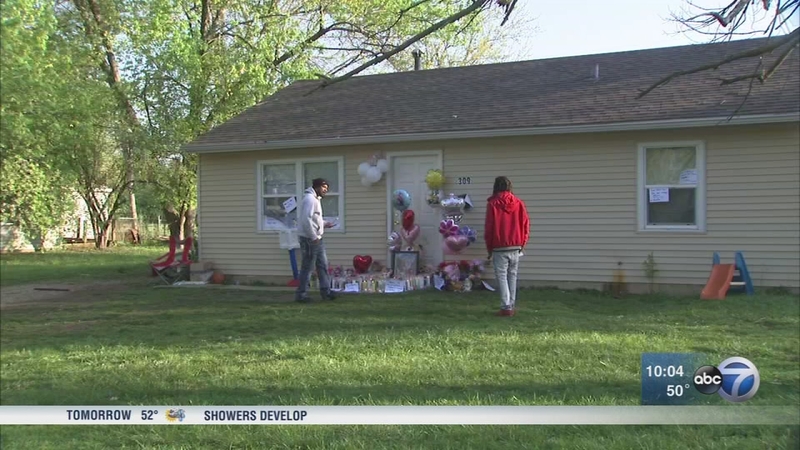 JOLIET TOWNSHIP, Ill. (WLS) -- Autopsy results in the "suspicious death" of a 1-year-old girl in southwest suburban Joliet Township were inconclusive. Her death has not been labeled a homicide at this point.

Semaj Crosby, 16 months, was found dead at her family's small home in the 300-block of Louis Road more than a day after she was reported missing.

The house was surrounded Friday by a memorial filled with candles, flowers and stuffed animals, instead of crime tape.

"I just saw I had a pillow I never use. Brand new. I wanted to bring it out here to the memorial. It said, "Love." I figured it was perfect for the situation," said Charollette Williams, a neighbor.

"Thank you guys, for all y'all help and y'all support," said Shari Gordon, Semaj's mother, through tears as she visited the memorial to her daughter for the first time Friday.

Two prayer vigils for the little girl were held Thursday night in the Preston Heights community. Many in attendance were the same people who tried to help find her during a massive search, on the premise that she had wandered off Tuesday afternoon.

After an intense search, deputies and the FBI negotiated Wednesday with a family attorney to get consent to look inside the home. The child's body was discovered around 12 a.m. Thursday, lying under a couch in the living room.

Investigators removed a couch wrapped in a blue tarp as evidence from the house. The sheriff's office said they did not find damage to the couch that would indicate her body was "placed in or through" it.

"We don't know anything. We can go by hearsay, he said she said, we don't know. But God knows," said Terra Sanders, relative.

Deputies told the Will County coroner they could not see any signs of blunt force trauma or physical injuries to Semaj's body that would indicate cause of death. Once toxicology reports come back, the coroner should be able to determine cause and manner of death.

The attorneys representing the Crosby family released a statement Friday, saying in part, "The family would like all to know that they greatly appreciate the outpouring of concern and support from the community, and in particular, the hard work and dedication shown by the FBI and the Will County Sheriffs, who are diligently working to ensure that the truth is brought to light and that justice will prevail for this child and her family."

The attorney also said the family is asking for privacy as they mourn the loss of Semaj.

The home was condemned because of deplorable living conditions - it was full of cockroaches and garbage. Deputy Chief Rick Ackerson, of the Will County Sheriff's Department, said Thursday as many as 15 people lived in the 864-square-foot home at any given time. He said a family attorney described some of those people as Semaj's relatives and some as "squatters."

"I heard this was a trap house. I hear there were 15 plus people coming out here. I read Facebook posts about drugs being sold here. I mean, how did DCFS not see this?" said neighbor Tricia Hernandez.

On Easter Sunday, three Will County Sheriff's deputies visited Semaj's home. Someone in the house had called 911 and hung up. When they arrived at the house to see if everything was OK, they saw a ground of children, ages 3-9, playing with sticks.

The officers spoke with their mother and grandmother, they found out everything was alright, but the children were sad they wouldn't be going to a relative's house to celebrate the holiday. The deputies also found out the Easter Bunny had not visited them.

They went to the store and came back with candy and toys to make Easter baskets for the children. Semaj was in a photo taken day, posted on the Will County Sheriff's Facebook page.

One of those deputies was at her house Friday. He called the whole situation surreal.

The community was shocked and horrified by the discovery.

"It's heartbreaking, you know? That's a baby. That's somebody's child," said Ebony July, who knows the family. "This the kind of thing you wish that would never happen to nobody's child. Ever. Ever. Ever."

"When I heard the news, I felt a deep pain, and I don't have any children," said Courtney Winfrey, a neighbor.

"It's just devastating. That shouldn't have happened to the little girl. Everyone in that house needs to be accountable for what happened to her," Williams said.

"The case isn't closed. The case is still open. They're still investigating, but now everybody is just waiting on the truth to come out," said Zachary Stocking, a neighbor.

The Illinois Department of Children and Family services, which investigated the family at least twice before, visited the home on Tuesday, hours before Semaj died.