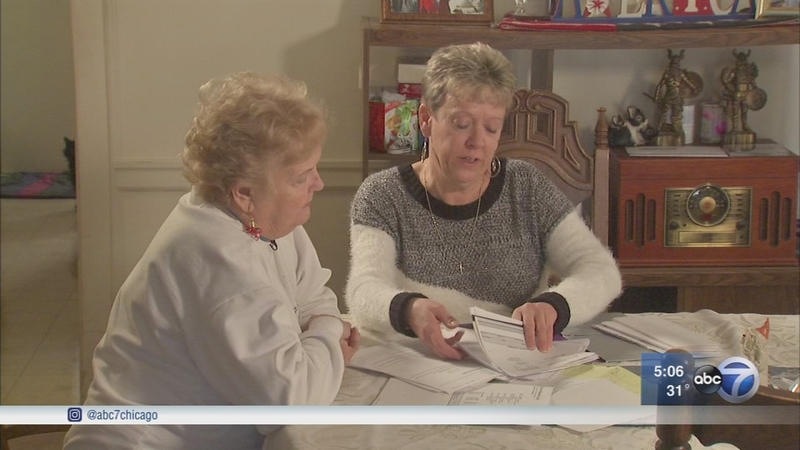 PORTAGE PARK, Ill. (WLS) -- A woman in northwest suburban Portage Park with over $2,200 in fraudulent charges is getting her money back after her bank refused to refund her because she waited too long to dispute the transaction.

Linda Winters keeps a good amount of money in her checking account, so it took her a while to realize her balance was shrinking.

Debbie, Linda's daughter, noticed the discrepancy when she found more than $4,000 in charges from Comcast and a department store.

"I thought there's something not right here," said Linda. "I said, Deb look at this, what is this? We don't have Comcast. We have AT&T. Why are they doing this? This is craziness."

First Midwest Bank refunded a large portion of the money but Winters and her daughter said they were still short more than $2,200 because 60 days had passed since some of the charges were made.

"So we called up the bank and said we have a problem here, there are all these charges on the account that aren't my moms, so the fraud department told us 60 days is all we can refund you," said Debbie. "They're punishing people, honest people, because maybe they didn't catch it in time."

A Comcast spokesperson said nothing could be done.

"Our hearts go out to Ms. Winters," Comcast said. "Our hope is that she and her bank have been able to resolve this situation to her satisfaction."

A First Midwest Bank spokesperson said it was an oversight and that while rules said quick fraud reversals should be within 60 days of the transaction, customers who want to dispute older charges can sign an affidavit and work with the fraud department.

Shortly after the I-Team reached out to them, the bank issued a refund.

"I am going to buy a nice Christmas present," said Linda.

First Midwest Bank said it is working with Comcast to find out who used Winters' checking account to pay the bill.

The easiest way to prevent this from happening is to use your bank's app on your smartphone and check your transactions almost every day.